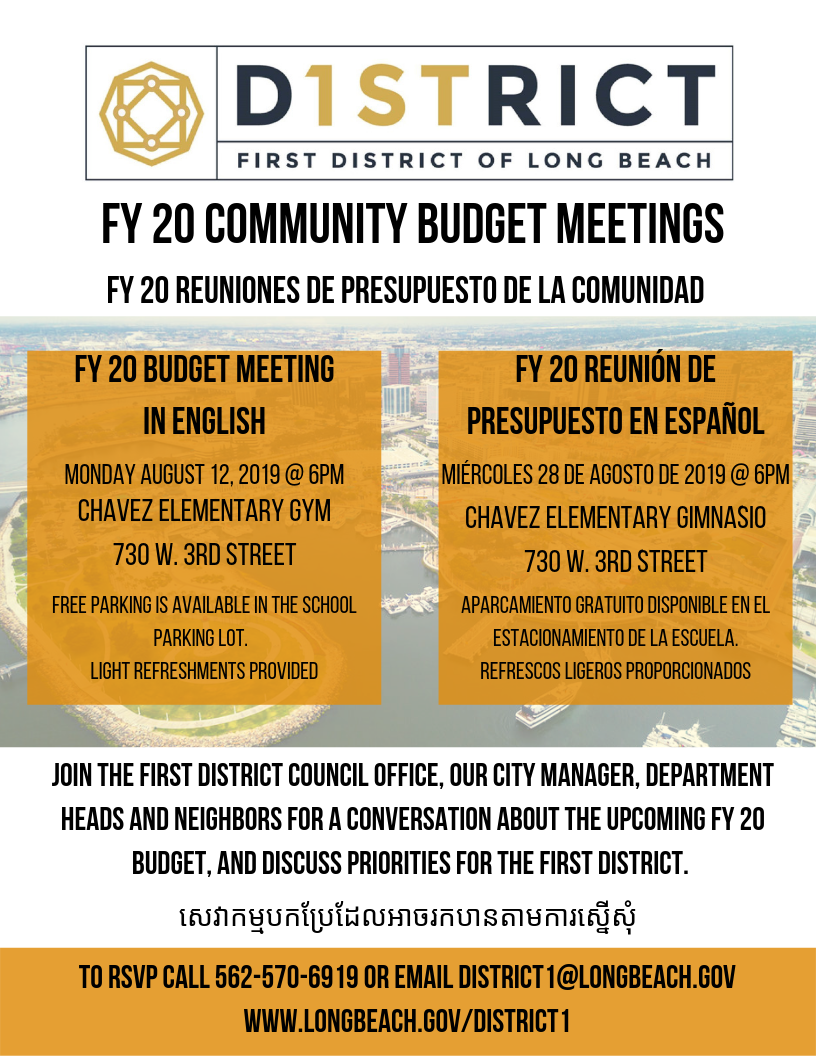 
As we enter budget season, it’s important that everyone in our community has an opportunity to understand and participate in the budget process. Below is some important information about our city’s budget and how you can get involved. 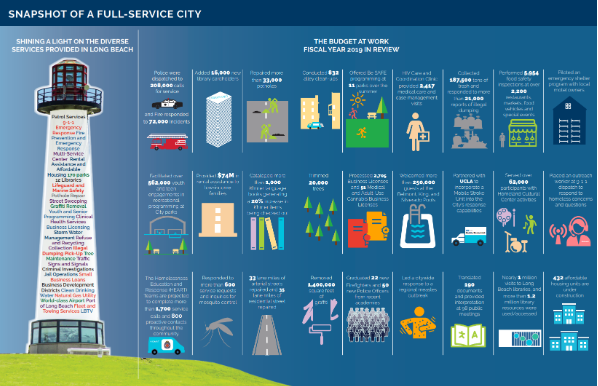 As a full service city, Long Beach supports nearly half a million residents with its budget. In FY 2019 the HEART Team are projected to complete 1,700 service calls and 800 proactive contacts throughout the community, 1,400,000 square miles of graffiti were removed and 432 affordable housing units are currently under construction. Here is a snapshot of some of the highlights of our current budget.

HOUSING & HOMELESSNESS:
$255,000 of General Fund one-time funds to support activities such as rapid response, cleanup, and outreach efforts.
Increase of $25,000 in the General Fund for the ongoing costs of utilities at the Housing Navigation Center.
Continued work on important housing policy items, including an Inclusionary Housing policy, implementation of the SAFE
Parking program and the Jobs program for those experiencing homelessness, and construction of a permanent homeless shelter.
The total estimated funding to address homelessness for FY 20 is projected to be approximately $30 million. Figures will change with updated grant award allocations.
INFRASTRUCTURE:
$54.8 million for mobility improvements, which include street repair and widening, traffic signal system expansion and upgrades, transit improvements, replacement parking and striping, neighborhood traffic management, and bike lanes.
$2.0 million of Measure A funds for park infrastructure improvements including continued work on Houghton Park Community Center, development of the Los Cerritos Wetlands, and Drake/Chavez Greenbelt.
$2 million for beach and marina improvements to maintain and improve City operated resources located in and around City waterways, including repairs to critical Tidelands facilities such as the Convention Center and Naples Seawall.
PUBLIC SAFETY:
Public safety positions maintained by Measure A increased to 121 positions (previously 108).
Nine positions added in the General Fund to support the full implementation of the Body Worn Camera Program and to provide the support needed to meet State mandates. Onetime cost of $1,358,104 for camera acquisition, technology upgrades, and officer trainings is funded by Measure A.
Two positions upgraded in the General Fund for the Justice Lab, which deploys a multidisciplinary approach to respond to individuals with high frequency contact with the justice system.
$100,000 of Measure A one-time funds for a jail mental health clinician to minimize recidivism and strain on City services.
$2.2 million of Measure A one-time funds for the Police Department’s Neighborhood Safe Streets Initiative, which uses community policing strategies to impact violent and property crime trends.
$800,000 of General Fund one-time funds and $1.4 million of Measure A one-time funds to support the cost of Police Academies in FY 20 and FY 21.
A VIBRANT COMMUNITY:
Continued work on 10-year Economic Blueprint including implementation of a Citywide Market for Hourly Labor Program to assist those with irregular work schedules; researching the creation of Opportunity Zones to promote development in underserved areas; and expanding the City’s small business loan program to serve more microbusinesses in underserved areas of the City.
An addition of an Adoption Coordinator and administrative support position in the General Fund to manage Animal Care Services adoption/volunteer programming, and $100,000 of General Fund one-time funds for donation support for Animal Care Services.
A full-time position in the General fund to coordinate the Language Access Program, and $80,000 of General Fund one-time funds to continue with program implementation.
$600,000 of General Fund one-time funds to support an accurate 2020 census count and efforts to redraw district boundaries.
$1 million of General Fund one-time funds to support the seismic retrofit of Long Beach Community Hospital.
Special Advertising and Promotions Fund one-time support to promote arts, culture, tourism, and communications: $200,000 for preparation and support of the 2028 Summer Olympic Games, $50,000 for POW! WOW! art murals, and $250,000 for wayfinding signage and historical plaques throughout the City.
This month City Staff will hold community meetings in each district to share the proposed budget with residents and highlight things that can be expected in each district in FY 20. There are two meetings scheduled in the First District. Please RSVP to save your sport today!