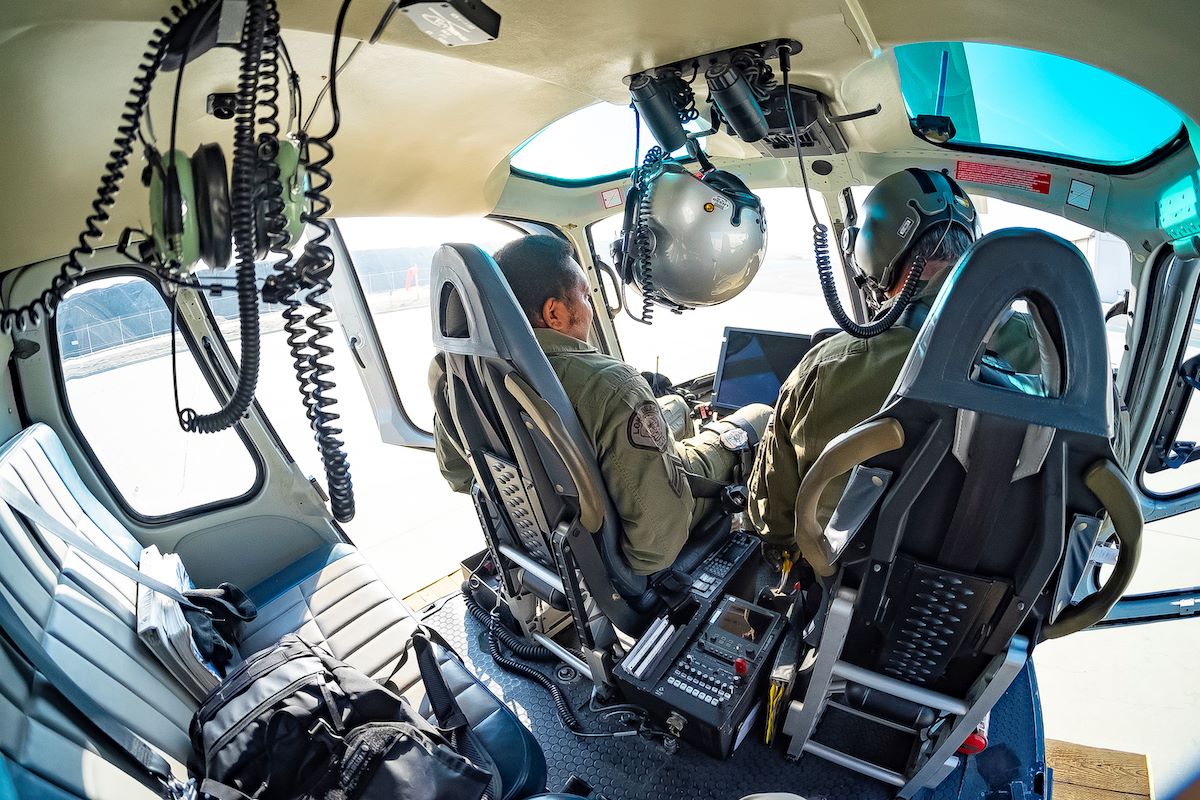 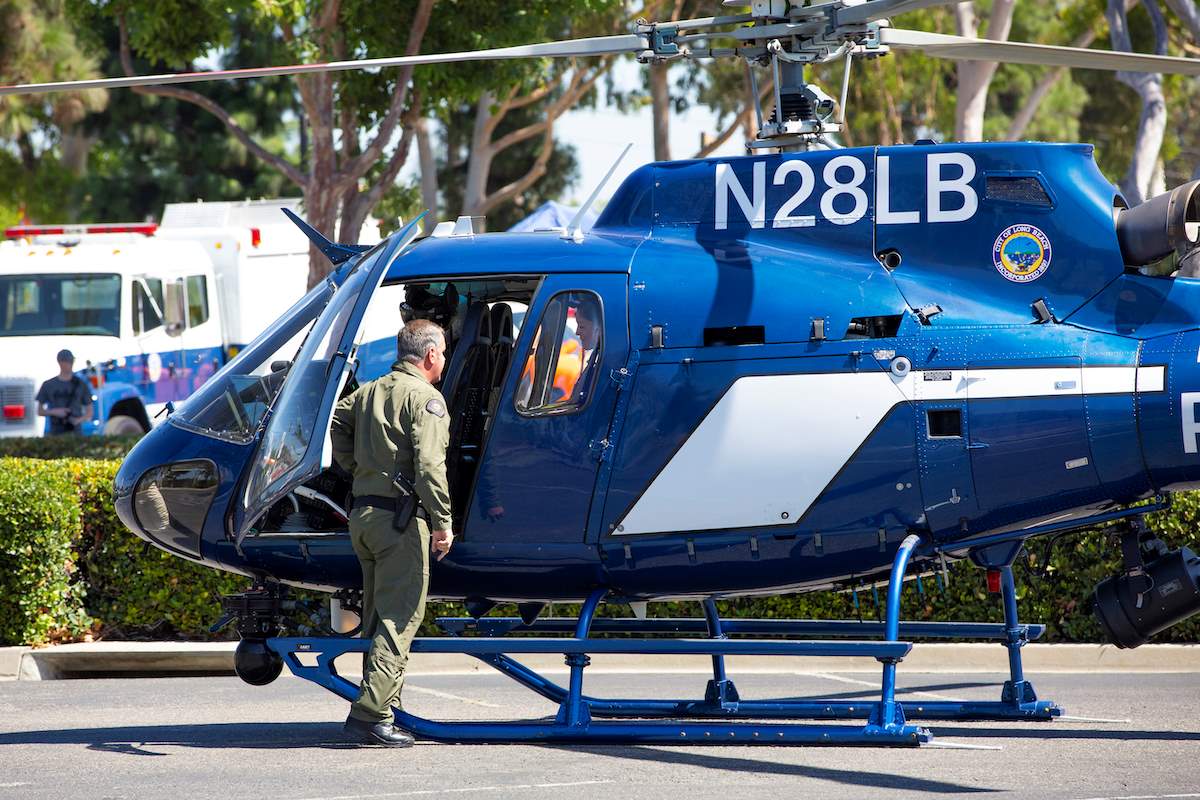 Anyone who has ever taken off or landed at Long Beach Airport knows those wonderful brief moments when the city appears in miniature, as a living diorama.  That same view is the tactical advantage employed by the Long Beach Police Department helicopter pilots and observers who patrol the skies over Long Beach in the LBPD’s Air Support Unit.

Flying 600 feet above the ground, armed with GPS computer maps, binoculars, infrared cameras, an onboard public address system and a powerful searchlight, the officers in the Air Support Unit are highly valued as force multipliers.

Officer Colbert and his partner, Officer Brian Armstrong, are two of the six officer-pilots in the LBPD Air Support Unit.  These pilots fly the LBPD's two Eurocopter AS 350 B2 helicopters in morning and afternoon shifts. 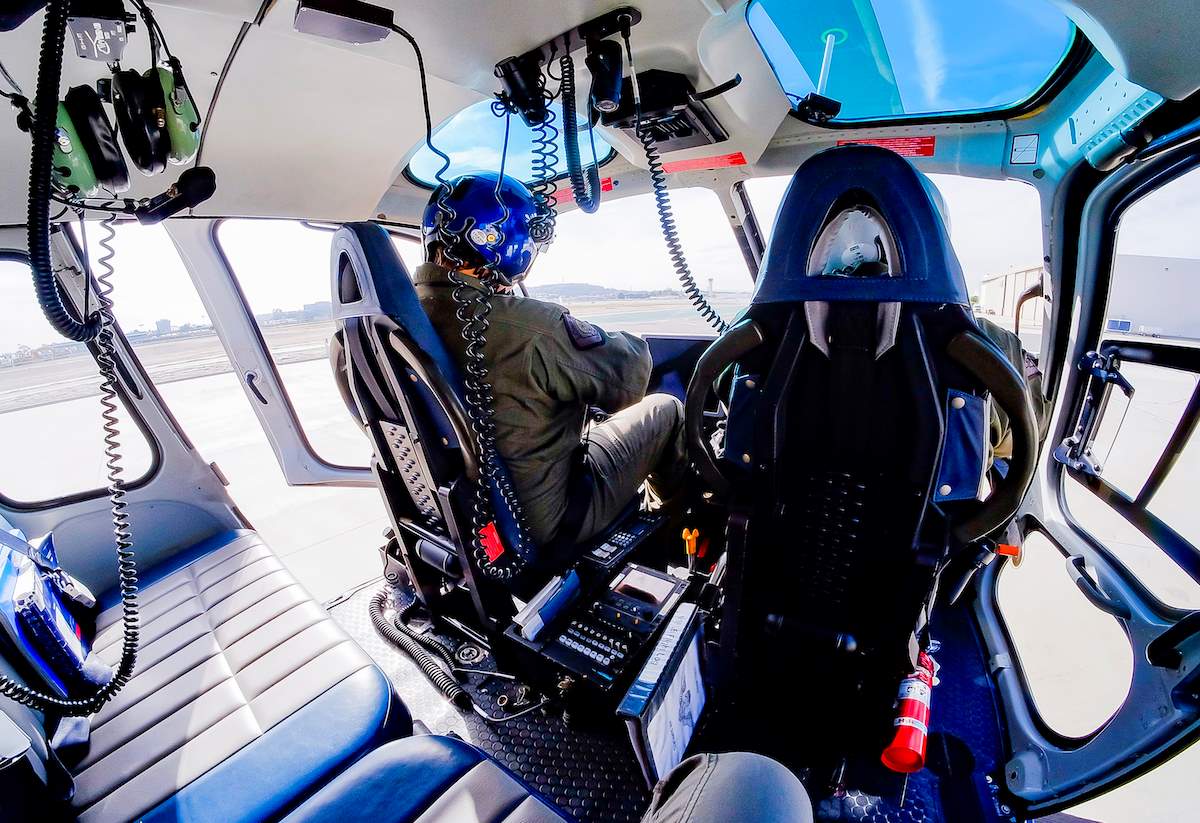 The Air Support Unit is an indispensable part of law enforcement in Long Beach, a city of nearly half a million people with one of the largest ports in the country. Helicopters are also one of law enforcement's greatest multi-taskers, participating in patrol operations, disaster response, surveillance, tactical operations, transportation, training, fire suppression aid, and search and rescue.

"When we get called about a boat that's floating five miles off the coast with a family onboard that needs rescuing, and we're able to locate them and notify the Coast Guard to rescue them, those are the days when we see the value of our operations," said Officer Colbert.

The LBPD was one of the first police agencies in the nation to use helicopters strictly for law enforcement: the first was the Lakewood Sheriff's Department, which began using helicopters in 1966.  Long Beach followed Lakewood's lead two years later.

Colbert and Armstrong both graduated from the Long Beach Police Academy 29 years ago and took different paths to the Air Support Unit.  Officer Colbert was a patrol officer for five years and was a member of the Bicycle Unit.

Officer Armstrong also began his career as a patrol officer before moving into the Motor Detail for nine years.  He and Officer Colbert have been in the Air Support Unit since 2002. Armstrong's father was a police officer, and so is his son.

Police helicopters are perhaps best known for their use in police pursuits.  Often the first on the scene, the Air Support Unit coordinates the blocking of streets and the setting of perimeters with officers on the ground.  The Unit's bird's-eye view allows it to anticipate a suspect's moves and scout potential hazards, such as angry dogs, for officers on the ground.

"If us flying around and being visible will help prevent certain crimes," said Officer Armstrong, "then that's a win-win situation."

During a significant incident, such as a flood, earthquake or power outage, the Air Support Unit becomes an airborne communication center. It can also help coordinate inter-agency communication and inter-departmental first responder activity among several City Departments.

The helicopters can stay aloft for more than three hours without refueling and can land, gas up and take off again in 15 minutes.

Officers Colbert and Armstrong, partners for 13 years, are good friends who attend each other's family parties and debrief each other after a patrol or an incident.  Both are honored to be LBPD pilots and are grateful to have the on-the-ground support from LBPD Chief Robert Luna and Fleet Services Mechanic David Acuna.

"Even after 17 years of flying," said Officer Colbert, "every time I touch down it's a victory."