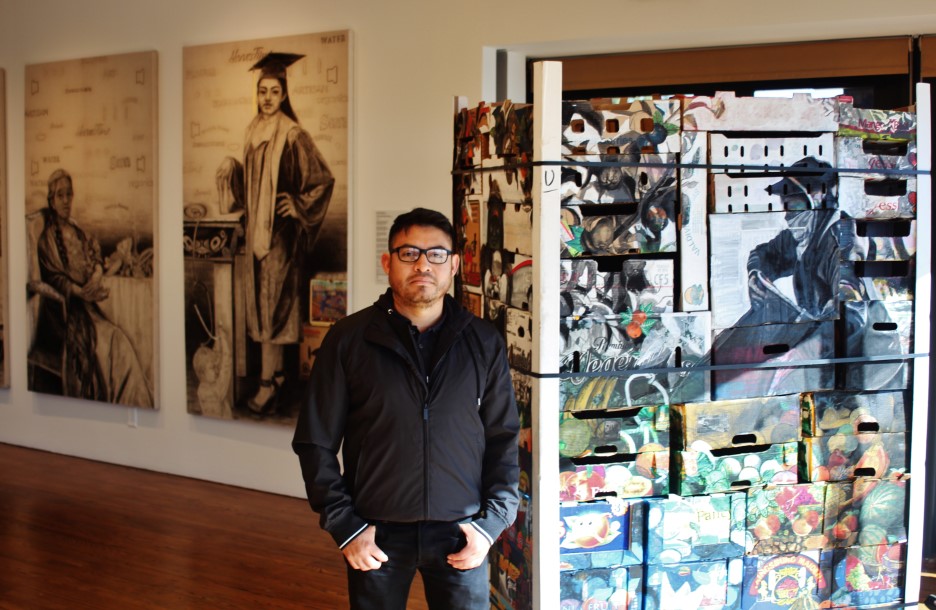 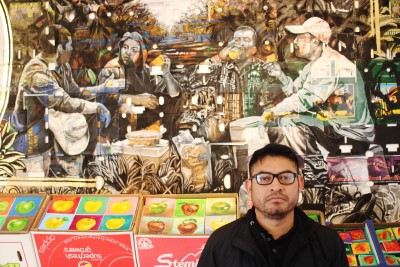 Narsiso Martinez definitely did the legwork in preparation for "Farm Fresh," his current exhibition at the Long Beach Museum of Art (LBMA), which runs through January 6.  Born and raised in a small town an hour from Oaxaca, Mexico, the 41-year-old artist spent his youth in the surrounding fields.  Narsiso came to the United States at age 19 and lived in several Los Angeles neighborhoods. He then went on to do back-breaking work picking asparagus, apples and peaches every summer in Washington during his college years studying art at California State University, Long Beach (CSULB).  InsideLB met with Narsiso at LBMA to discuss his vivid and heartfelt artwork, in which he utilizes various artistic mediums to address the life of farm workers.

Martinez: When I was a student in Mexico, I always used to carry a sketch book with me.  I got my G.E.D. in 2006. At that time I was already 29 years old. Then I went to a community college and took art classes. I learned a lot about Vincent Van Gogh, and that's when I fell in love with painting. His landscapes were so familiar. Van Gogh's colorful landscapes led me to really investigate the mixing of paint and how to create space.  I was also inspired by David Alfaro Siqueiros, the Mexican muralist of the '30s. He was trying to create work for the community and spread the word of the working class.

InsideLB: How do you want to make people feel about farm workers when they see your artwork?

InsideLB: Tell us about your experience as a farm worker.

Martinez: I grew up in a small town which was very agricultural. I grew up in fields. My Dad would take me to the fields to help around. It was very different over there [in Mexico], though. Over there, we cultivated our own foods for our own consumption. We didn't have any irrigation systems. We relied on the rain. We saved all the produce harvests for the entire year. When I transferred to Cal State Long Beach, I started working in the fields here in the United States.

InsideLB: How did you end up exhibiting in the Long Beach Museum of Art?

Martinez: It all started a year and a half ago when I had a show going in San Pedro. I was invited by the LBMA to do a lecture here for high school students, which I did in this very room. I did a presentation about my work. The LBMA offered that I take over the Ralph Stone Family Center [a gallery in the LBMA]. I had the director of the Museum come over to one of my classes at CSULB to do a critique of my work, and soon after that, I was invited to do a show here.  Before the show, I was invited to do another residency in a large room on the other side of the museum. 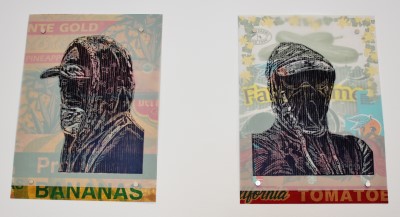 InsideLB: In some of your paintings, the workers have some pretty intense headgear on. Can you talk about that?

Martinez: In the beginning, it was mostly women who wore that headgear. They wanted to save their looks and look good on the weekend. They didn't want any sunburn. Eventually, the men learned about all the damage from the weather and pesticide residues that were on the branches, and now, pretty much everyone wears some kind of protection on their faces. It's hard to breathe with those bandannas on, and it's really sad because some workers don't wear them, and they expose themselves to those chemicals.

InsideLB: On a scale of one to five, how would you rate the difficulty of that work?

Martinez: Well, it's really a six. Really hard. I remember the first time I picked asparagus. We had to be in the field from 1 a.m. to 3 p.m., all day, just bending over and picking asparagus. We got paid by the weight of the asparagus we picked, and it was very tricky because they wanted us to chop the asparagus to a certain length. Very hard work. A lot of people make a joke that it's a job to test 'real men.'  A lot of people don't make it. After one day, they just stop going.

InsideLB: How do you feel about the relationship between the agriculture industry and farm workers? 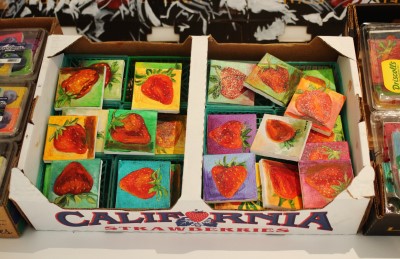 Martinez: I feel like the process of bringing produce to our grocery stores has been erased, and you can see evidence of this on produce boxes. They're pretty. They have little cartoons that soften the idea of the agricultural workers. That's what I'm trying to represent in the piece with all the little oil paintings in the produce boxes. I was trying to make them pretty and shiny. All of this prettification erases the contribution of the Latino people.

InsideLB: What are your future plans for your work?

Martinez: I always just go with the flow. If somebody's interested in my work, I'm happy to collaborate, but now, thanks to a grant from the Daedalus Foundation, which is based in New York, I'm really just focused on creating things.