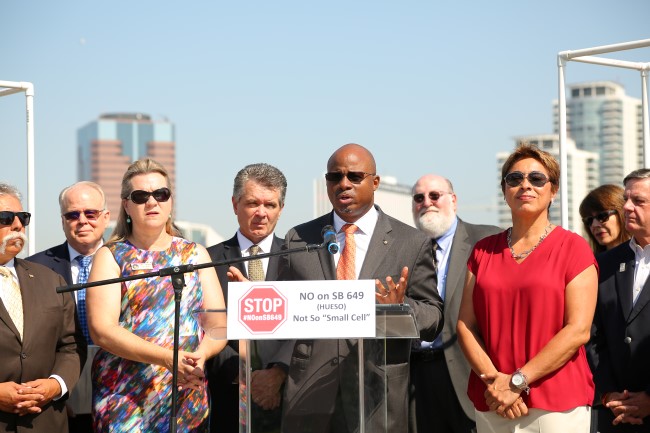 The City of Long Beach along with representatives from the Downtown Long Beach Business Associates, the Belmont Heights Community Association and the American Public Works Association of Southern California today urged the Legislature to reject SB 649 (Hueso). Opposed by more than 215 cities and dozens of counties, this legislation would virtually eliminate cities’ authority to negotiate with telecommunications companies on the siting of wireless equipment in the public right of way and on public infrastructure. SB 649 would also cap the lease rates far below market rate, on public infrastructure. The group held a press conference this morning in Long Beach near Pierpoint Landing.

“SB 649 would nearly eliminate Long Beach’s, and every other local government’s ability to manage the way in which telecommunications equipment is deployed in neighborhoods and around businesses, just so the telecommunications industry can have their equipment permitted more rapidly throughout California,” said Councilmember Al Austin. “Our unequivocal opposition to SB 649 is 100% consistent with our support for diverse communities.”

Cities support advances in technology, unique and diverse neighborhoods, businesses and closing the digital divide. Cities also have the authority to work with telecommunication companies to advance modern technology through an established discretionary permitting process, and many are doing so. Cities are responsible for updating local zoning codes to reflect land use changes, based on the evolution of local neighborhoods and residents’ needs. Discretionary control of local land use decisions is critical to preserving and supporting the unique identities of California's diverse communities. The bill has widespread opposition because it erodes local land use control, and subsidizes the telecommunications industry at the expense of our local neighborhoods.

Each of the speakers urged the Legislature to listen to the opposition and reject SB 649.
Austin Metoyer, a policy and research manager with the Downtown Long Beach Business Associates raised concerns on the legislation’s impact: “The Downtown Long Beach community has spent over two decades working with the city to redevelop the area into the vibrant destination it has become. We have worked hard to transform this area and our efforts have created a unique asset to Long Beach. SB 649 would leave communities like ours, and the elected officials who represent us, without any ability to determine how wireless technology equipment is integrated into our public infrastructure. 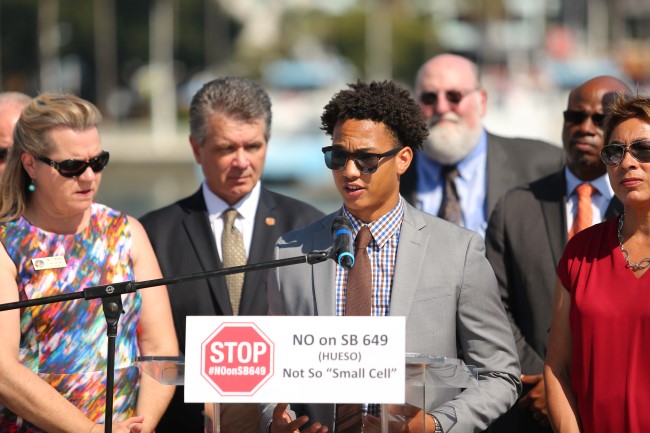 SB 649 would give the wireless giants virtually limitless ability to install antennas, wireless boosters, and other equipment. The bill would shortchange taxpayers by capping lease rates of public infrastructure statewide. Meanwhile, Californians would still pay the same high prices for their wireless services.

Sydney Simon, Belmont Height Community Association board member, says that this bill is a “giveaway” to the telecommunications industry at the expense of Long Beach residents. “If this bill passes, we could potentially see cell antennas and associated equipment of up to 21 cubic feet on our utility poles.”

James Biery, legislative chair with the American Public Works Association of Southern California, spoke about the fact that SB 649 does not ensure better connectivity for all Californians. “The bill would also strip existing requirements for telecom companies to invest in disadvantaged communities, increasing the digital divide between wealthier coastal communities, and inland and rural areas that do not enjoy the same quality of cellular and high-speed internet service. We strongly support policies that lead to job-creating upgrades in technology and innovation. But SB 649 does nothing to achieve this goal.”

The speakers were joined at the podium by elected city officials from throughout Los Angeles County including: 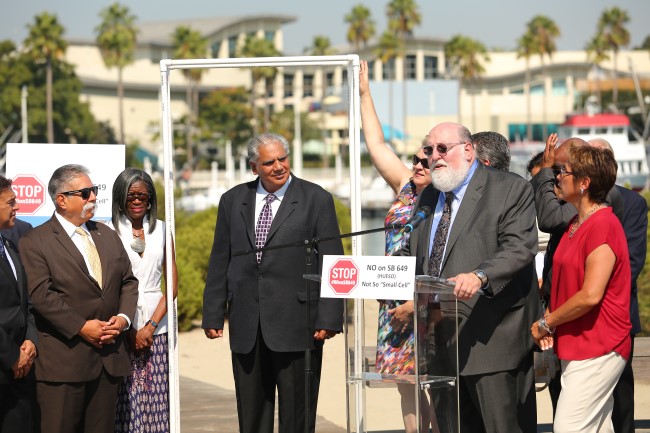