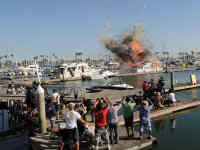 The City of Long Beach Office of Special Events and Filming has won the Location Managers Guild of America annual award for Outstanding Film Commission, besting four other film commissions around the world.

“Long Beach is home to a vibrant filming business that promotes economic development, including increased activity at restaurants, shops and other businesses,” said Mayor Robert Garcia. “We do filming right.”

The location manager for “NCIS-LA” nominated the City’s Office of Special Events and Filming for its work on last season’s show. The four other nominees were Chicago Film Office; Film in Iceland; Oregon Governor’s Office of Film & Television; and Royal Film Commission of Jordan.

The City of Long Beach benefits from being located within the 30-Mile Studio Zone, where some production costs are lowered within 30 miles of Downtown Los Angeles.


A total of 437 film permits were issued in Fiscal Year 2014, with a total of 655 production days. Most of the filming in Long Beach is for commercials and TV shows, but many feature films have been shot here.


Other productions shot in Long Beach include “Dexter,” “American Beauty,” “American Pie,” “Transformers 2” and “Ferris Bueller's Day Off,” which was filmed inside a home in the Virginia Country Club neighborhood while the owners continued to live there.

The second annual Location Managers Guild Awards were handed out on March 7 at the Wallis Annenberg Center for the Performing Arts in Beverly Hills. The awards honor the outstanding and creative contributions of location professionals in features, TV and commercials.