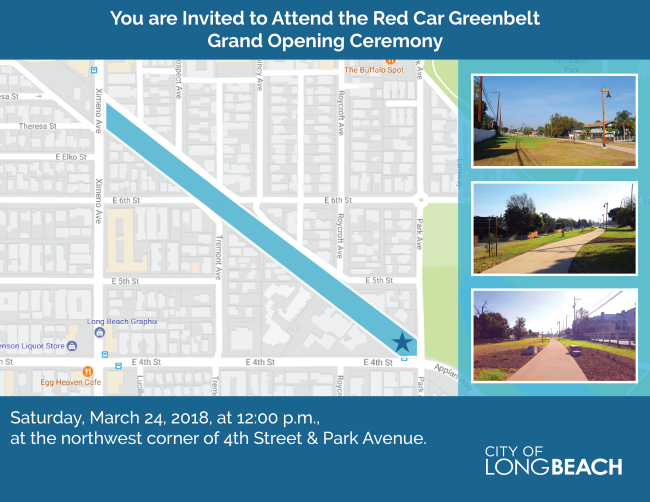 The public is invited to attend a grand opening celebration for the Red Car Greenbelt on Saturday, March 24, 2018, at 12:00 p.m., at the northwest corner of 4th Street and Park Avenue.

"The Red Car Greenbelt will enhance Long Beach’s walkability and bikeability with a newly paved path that adds routes for walkers and links to the bike path at 6th Street,” said Mayor Robert Garcia.

The Red Car Greenbelt is a 3.66-acre project that consists of a ten-foot wide decorative concrete pedestrian walking trail and drought-tolerant native landscaping on the former Pacific Electric Right-of-Way (PE ROW), between Park Avenue and Ximeno Avenue. The project is part of the PE ROW Greenbelt Master Plan, which starts at the intersection of Park Avenue and 4th Street and extends northwest to Loma Avenue.

“The new Red Car Greenbelt is a wonderful example of an unused area being transformed into much needed recreational open space,” said Councilwoman Suzie Price. “This new park connects last year's Red Car Greenbelt built in Greenbelt Heights all the way down to the Colorado Lagoon. Residents can walk, bike, or just relax in the beautifully landscaped setting creating a much-needed community park with one of the last undeveloped spaces in the district. I am so thankful for the community involvement and input that has led to this fantastic new neighborhood park.”

The project will feature:

The Project incorporates sustainable design features that include a selection of native shrubs and hydro seeding mixes containing California natural grassland and coastal wildflower. The water-efficient landscape design will exceed the efficiency limits set by the State. The proposed green space will create shade that reduces the temperature of the surrounding area, leading to reduced energy use, and providing pedestrians and cyclist paths for improved connectivity and safety.

In 2016, Long Beach voters recognized a pressing need to maintain and enhance public safety services and invest in City infrastructure. Thanks to the passage of Measure A, Fire Engine 8, Rescue 12, South Division, and Police Academy operations have been restored, enhancing public safety citywide. The City is also making a historic investment in revitalizing heavily utilized public spaces such as streets, libraries, community centers, and parks. Anticipated to raise $384 million for the City of Long Beach, over ten years, Measure A is collected as a one percent sales tax for the first six years, and then reduces to half a percent in the four years before it sunsets.