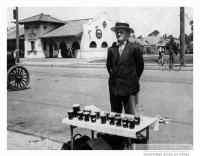 *** Updated on Feb. 3 – The move is scheduled for overnight on Wednesday, February 4, starting at approximately 9 pm. In order to transport the Depot safely, Tow-Away Zones have been established on the west side of Magnolia Avenue between 16th and 3rd Streets, and on the south side of Ocean Boulevard from Magnolia to Atlantic Avenues. The Tow-Away Zones will go into effect at 9 pm on Wednesday, February 4. To minimize impacts, the Tow-Away Zones will be lifted immediately as the Depot clears each block. Except for this updated information, the information below in the original press release remains current. ***

*** Updated on Jan. 29 – The planned move has been postponed, and is tentatively scheduled for overnight on Wednesday, February 4.  Additional information will be provided shortly. ***

Overnight tonight, January 28, 2015, the City of Long Beach will move the historic 107-year-old Southern Pacific Railroad Depot from the Public Service Yard on San Francisco Avenue to a new site at Willow Springs Park, where it is expected to serve as an interpretive center after being renovated.

"We're all very excited to see this nearly forgotten Long Beach landmark get a new life at Willow Springs Park," said Mayor Robert Garcia. “This project is a great example of the historic preservation and adaptive reuse that is happening all over Long Beach.”

Starting at approximately 10:00 pm, the Depot will be moved along a designated oversize vehicle route that will run south on Magnolia Avenue, east on Ocean Boulevard, north on Atlantic Avenue, east on Willow Street and north on California Avenue to 27th Street. The move will be escorted by the California Highway Patrol which will control traffic at intersections as the Depot moves through them. The 5.5 mile move is expected to take approximately five hours to complete.

“The Depot will bring an added element of excitement and history to Willow Springs Park," said Councilmember Roberto Uranga. "From its careful breakdown to tonight's relocation, much buzz has been created amongst the Long Beach community and the Seventh District welcomes what will surely be another great Long Beach landmark!"

The Depot, originally built in 1907 near Broadway and Pacific Avenue, is the sole survivor of the three railroad stations that once served Downtown Long Beach around the turn of the last century. It was relocated once before, in 1936, to the Public Service Yard on San Francisco Avenue near West Anaheim Street, where it served for many years as the City’s Material and Chemical Testing Laboratory before being used for storage.

The Depot will be moved to the southwest corner of Willow Springs Park, near the site of former railroad tracks that had been used by the Los Angeles & Salt Lake Railroad.

The Depot is 66 feet long and 30 feet wide, and was built in the Mission Revival style. Partial deconstruction of the Depot is necessary to reduce its overall height in order to fit under overhead wires and traffic signals. Once at Willow Springs Park, the Depot will be reassembled and then begin a multi-year restoration process prior to being re-opened to the public.

The first phase of Willow Springs Park, bordered by Orange and California Avenues and Willow and Spring Streets, opened in November 2012. The park features an ADA accessible path and parking stalls, fencing, native shrubs and trees, seating, and a plaza with an integrated map depicting the Los Angeles basin watershed. The park will ultimately consist of 47 acres of developed parkland.