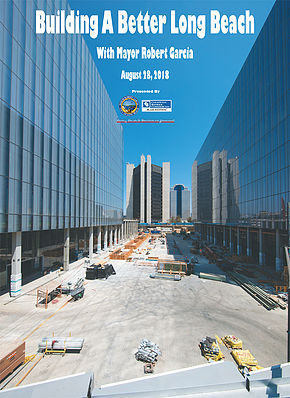 
By: George Economides and Brandon Richardson

On Tuesday, August 28, Mayor Robert Garcia presented the Building A Better Long Beach Forum, during which he providing an overview of more than 70 projects underway or planned throughout the City of Long Beach. Earlier this month, Long Beach was ranked as the U.S. city with “the most nice days per year” by the Washington Post and climate scientist Brian Brettschneider – the latest in a series of recognitions the city or its agencies have attained in the past year, including: the “Best Green Seaport” in the world; one of the “Top 10” airports in the country; a “Top 10 Digital City;” “Best in the West 2017” award to the Long Beach Area Convention & Visitors Bureau; and among the “Top 10” most walkable cities in the U.S., to name a few. Add to those accomplishments the unprecedented residential, retail, office and industrial development stretching across the city, and Long Beach is certainly on a roll.