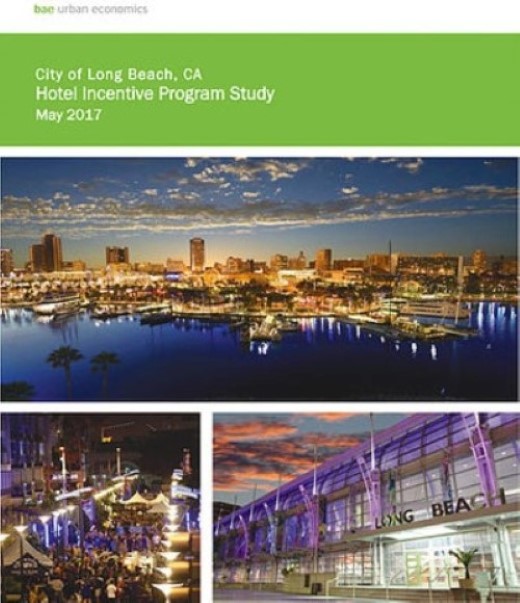 
A study of the Long Beach hotel market, conducted by BAE Urban Economics and real estate consultant group Maurice Robinson & Associates, predicted that long-term demand for hotel rooms will increase through 2040, especially among business travelers. To accommodate the influx, the study recommended that the city implement transient occupancy tax (TOT) rebates to encourage the development of new hotels.

Travelers are charged the TOT when they rent accommodations. In Long Beach, the tax is 12% of the room rate. Currently, the city has no formal policy concerning TOT rebates and provides them on a case-by-case basis, according to Long Beach Economic Development Department Deputy Director Sergio Ramirez.

In April 2016, Long Beach Mayor Robert Garcia and the city council requested a study to evaluate a potential rebate program for hotels.

According to the report, occupancy and room rates are at “historically high levels.” Ramirez said the high occupancy rates are due in part to the city’s strong economy, with growth in all sectors. “I think the development boom is playing a factor. Our Long Beach Convention & Visitors Bureau is doing an amazing job attracting business and conventioneers to the center. Long Beach is one of the few large California cities on the waterfront. It has a downtown, it’s walkable, and people are paying attention to that.”

Currently, four new hotel projects are in the works. According to Ramirez, real estate developer American Life, Inc. submitted a proposal for a hotel located on Ocean Boulevard and Pine Avenue. It is currently in the entitlement process, which means it is under review by the city’s planning department. Ramirez said the planning commission will review the project before the end of the year. A TOT incentive program specific to this hotel was approved by city council. Nearby, local investors have plans to refurbish the former Breakers Hotel located at 210 E. Ocean Blvd.

Ramirez predicted that, as the city attracts more residents, it will positively affect the hospitality industry as their friends and family will come to visit. He also said the city’s participation in the 2028 Olympic Games is expected to increase demand for hotel rooms.

According to the report, business travel is the biggest source of demand for hotel stays and is expected to increase as office and industrial park development attracts more jobs and economic activity. Ramirez also predicted that the Port of Long Beach and California State University, Long Beach would generate more travel to the city.

According to Pamela Ryan, the general manager of Renaissance Long Beach Hotel and chair of the city’s hospitality alliance, the commercial airline industry also drives up occupancy rates at local hotels. “The airlines coming into Los Angeles International Airport or Long Beach Airport require rooms for the crew flying the planes,” she said. “Our market has a fair amount of the crew business, anywhere from between 10% and 13% based on the numbers I see. This base allows the hotels to have some insulation in the slower times.”

The report predicted that, if the planned hotel projects are indeed constructed, the additional 834 rooms would result in a “moderate over-supply” in the near term, through 2020, but that long-term demand would catch up. Ryan and Long Beach Marriott General Manager Imran Ahmed expressed doubt as to whether future demand will be sufficient to accommodate the projects. “Definitely today [in the short-term], if all these hotels are built, everybody’s going to suffer,” Ahmed predicted. “I can’t say in the future whether we will have that kind of demand to support all the hotels.”

Although he cited a slight decline in convention center business for this year, Ahmed said that he has not been in Southern California long enough to experience a “low tide” in the hospitality industry.

Ryan said that, from her perspective, she does not know which industries will drive future business travel to Long Beach. “The convention and visitors bureau is a big part of our business. That business from year to year, depending on the cycle of these conventions, can be good or not so good,” she commented. “When you start adding more hotels, what’s going to be the business that’s going to help us fill all those hotels? Maybe the convention center’s going to bring in bigger groups. The question I would have then is, how big can these conventions get? At what point do they outgrow the center itself?”

Ryan also questioned whether tourism was a big enough draw to justify the hotel projects. She added that rates in Long Beach were lower than those at many hotels in the Los Angeles and Orange County areas, contributing to higher occupancy.

As for a TOT rebate program, despite the recommendation of the report, Ramirez said he does not see the city moving forward with that in the near future. “We’re seeing a healthy pipeline of hotel and hospitality projects in all sectors come through,” he said. “We recently launched a campaign advertising the city for development opportunities. Whether in residential, commercial or hospitality, we want people to invest in our community. I think our marketing efforts alone right now are doing the job of a formal policy.”