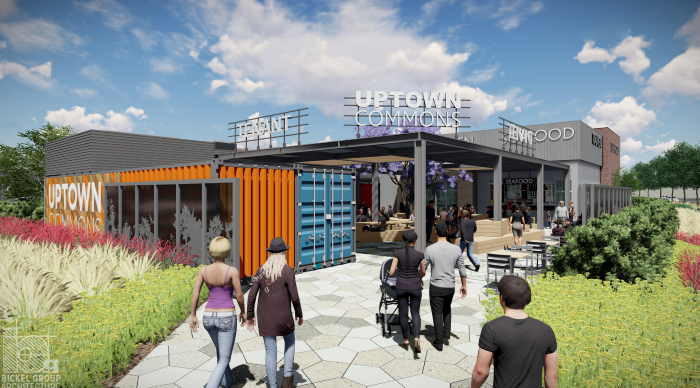 
By Brian Addison for longbeachize

The Uptown Commons, one of three major North Long Beach developments that include the similarly named Uptown, as well as Shaheen Sadeghi’s ambitious Canvas project, will be taking over an empty, two-acre lot at 6600 Atlantic Ave.

In a design developed by Newport Beach-based firm, Bickel Group Architecture, the look is simple and forward: lots of brick and wood are met with dark metals, atriums, green spaces and patios. The space will host five new restaurants, including the recently announced addition of Chef Fernando Valladares’ Portside Fish Company.

Already with a significant following for its flagship Irvine location, the space specializes in some local classics: they have a “San Pedro platter” honoring the San Pedro Fish Co., which happens to be opening its first Long Beach location, as well as decadent things like Bacon Mac n’ Chowder bread bowls.

The seafood-centric restaurant joins a ton of other options that will not only shift the way North Long Beach eats—from hot chicken and Filipino grub to ramen and Asian fusion—but even banks. Uptown Commons will offer the neighborhood of District 9 its first full-service bank.