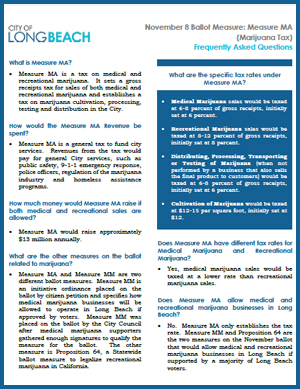 
View the Powerpoint Presentation in PDF format. Below are the questions answered in the FAQ document:

How would the Measure MA Revenue be spent?
Measure MA is a general tax to fund city services. Revenues from the tax would pay for general City services, such as public safety, 9-1-1 emergency response, police officers, regulation of the marijuana industry and homeless assistance programs.

How much money would Measure MA raise if both medical and recreational sales are allowed?
Measure MA would raise approximately $13 million annually.

What are the other measures on the ballot related to marijuana?

Measure MA and Measure MM are two different ballot measures. Measure MM is an initiative ordinance placed on the ballot by citizen petition and specifies how medical marijuana businesses will be allowed to operate in Long Beach if approved by voters. Measure MM was placed on the ballot by the City Council after medical marijuana supporters gathered enough signatures to qualify the measure for the ballot. The other measure is Proposition 64, a Statewide ballot measure to legalize recreational marijuana in California.

What exactly does Measure MA Tax?
Measure MA taxes all components of the marijuana industry should Long Beach voters choose to allow medical or recreational marijuana in the City. The gross receipts tax would be paid at the time of sale for those purchasing at a dispensary or in the case of a business purchasing from another business. The cultivation tax is paid by those growing the product.

Who pays the Measure MA tax?
Only those purchasing marijuana at a dispensary or marijuana businesses pay this tax. General members of the community who do not purchase, cultivate, test or process marijuana will not pay any additional taxes.

Do other jurisdictions tax marijuana?
Yes. Long Beach studied 16 other California cities for their tax rates. Cities across California tax this industry at different rates, with rates up to 15 percent of gross receipts. A study of those 16 other cities shows that Long Beach’s rates would be at approximately the midpoint.

Why did the City Council put Measure MA on the ballot?
The City Council received a report from City staff demonstrating the City would need significant financial resources to properly regulate this industry. Specifically, City staff estimate that should Measure MM pass, it would be necessary to spend approximately $12 million per year on medical marijuana alone to cover the regulatory, enforcement, health and public safety costs. These estimates are based upon the City’s prior experience addressing both legal and illegal medical marijuana businesses in Long Beach, as well as experiences from states and other cities that have allowed medical marijuana businesses. Further, City staff have reported that the marijuana tax rates in Measure MM will not fully offset these costs. Due to these reasons, the City Council placed this competing measure on the ballot for voters to consider, which sets higher rates than those in Measure MM.

What happens if both Measure MA and MM are approved?
If both measures are approved, medical marijuana businesses will be allowed to operate in the City of Long Beach, subject to those regulations contained in Measure MM. However, the City’s marijuana tax rates will depend upon which of the two Measures receives more votes. The Measure receiving the highest number of votes will set the tax rates.

Hearings, Meetings and Presentations pertaining to the City of Long Beach Budget