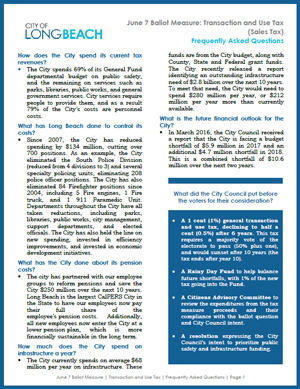 
For all of the Frequently Asked Questions, head to a handy 2 page document. Below is a sampling of 6 of the 14 questions answered in this document.


What did the City Council put before the voters for their consideration?
A 1 cent (1%) general transaction and use tax, declining to half a cent (0.5%) after 6 years. This tax requires a majority vote of the electorate to pass (50% plus one), and would sunset after 10 years (the tax ends after year 10).

A Rainy Day Fund to help balance future shortfalls, with 1% of the new tax going into the Fund.

A Citizens Advisory Committee to review the expenditures from the tax measure proceeds and their compliance with the ballot question and City Council intent.

How much money would the ballot measure raise?
The temporary 1% tax generates approximately $48 million per year for six years. When it drops to 0.5% in the remaining four years, it generates approximately $24 million per year. Long Beach total sales tax rate would be 10% for 6 years, then drops to 9.5% for the remaining four years, then drops to 9% after year 10. The new tax would be paid by everyone, including the City’s 6.5 million visitors. Additional tax on a $1 item would be 1 cent.

How would the funds be spent?
The tax is a general tax to fund municipal services. The Mayor and City Council have stated their funding priority as public safety and infrastructure. The Police Department’s top priority is the restoration of the South Police Division, and the Fire Department’s top priority is restoration of Fire Engine 8 in Belmont Shore to help improve response times citywide. The funds would also support millions of dollars of infrastructure projects, including streets, sidewalks, stormwater protection, and water conservation.

Where would this new tax place the City compared to other cities?
Cities levy various taxes including property tax, sales tax, and the utility users tax (UUT). While the new 1% sales tax in Long Beach would temporarily make the sales tax rate one of the highest in the region, the overall burden for taxes in Long Beach would be only slightly above average with the new tax. Long Beach surveyed 27 small, medium and large cities for average total tax paid for property, sales and UUT. Long Beach currently ranks 14th of 27 cities for total average tax paid. With a 1% increase, total tax paid would rank Long Beach 12th of 27 cities. The total tax burden would increase by about $68 per year for a person ($5.67 a month).

What will happen next with the proposed tax?
Taxes can only be raised by a vote of the people. Voters will decide on June 7 whether to approve or reject the tax measure. Either way, the City will develop a balanced budget and manage the City’s expenses. Any funds approved will be reviewed the Mayor and City Council each year through the annual budget with community participation.

Hearings, Meetings and Presentations pertaining to the City of Long Beach Budget