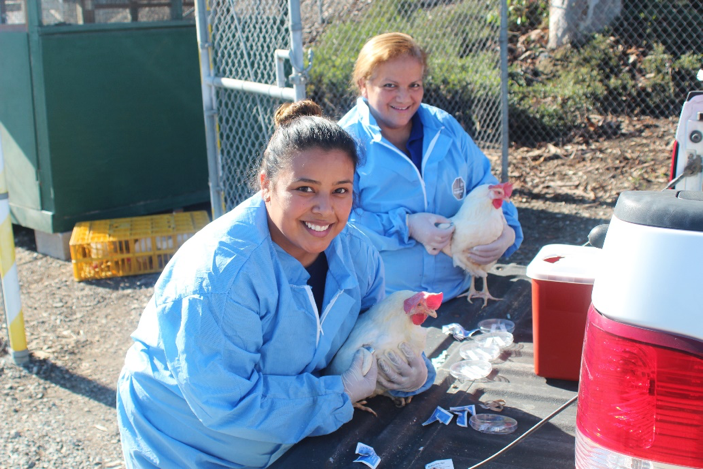 The Long Beach Police and Fire Departments are the high-profile protectors of the citizens of Long Beach, but there's a smaller City organization which, among its other animal-related duties, protects Long Beach from the deadliest animal on Earth—the mosquito.

Vector Control, working under the umbrella of the Long Beach Department of Health and Human Services, is tasked with limiting the breeding of mosquitoes in Long Beach, and by doing so, limiting the spread of lethal, mosquito-borne diseases such as West Nile virus, Zika, Dengue Fever, and St. Louis Encephalitis.

"Long Beach is perfect for mosquitoes," said Vector Control Supervisor Lamar Rush, citing the harbor, the seasonal wetlands and the marshes next to Long Beach's two rivers as ideal mosquito habitats. "Without Vector Control, you wouldn't even be able to go to the park."

Rush began our ride-along by taking us into the storage room, which doubles as a lab. There, he showed us the backpack-style sprayers used to apply larvae-killing bacteria powder to marsh grasses. This same bacterium can also be mixed with water and poured into drains and gutters. This bacterium is harmless for humans and other animals.

On a desk next to the sprayers was a microscope, which Rush uses to examine and identify the various types of mosquitos and insects that have been reported by the community. Rush’s team also extracts the brains of deceased and potentially rabid animals, that are then tested by the lab to confirm infection.

"We have to be blue-collar, and we have to be scientists too," said Rush, who reads constantly and is patched in with both California-wide and nationwide Vector Control networks.

Next, Rush took us outside to a custom-built fish tank in which he breeds Gambusia, also known as the Mosquitofish. This inch-long fish aggressively eats mosquito larvae. Over his 21-year Vector Control career, Rush has released thousands of Gambusia into Long Beach's mosquito breeding areas.

As we looked at the Gambusia, we were greeted by Nelson Kerr, Manager of the City’s Environmental Health Bureau. 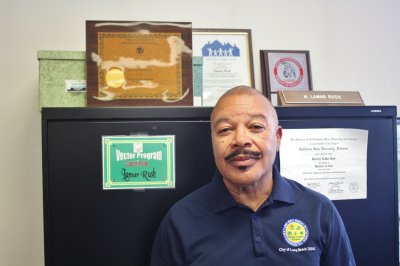 "Lamar knows where all the major breeding sites are in the City," said Kerr. "He knows when they're going to emerge, and he's there waiting for them. We keep really low disease counts in our city: If you're less likely to be bitten by a mosquito, you're less likely to contract a mosquito-borne illness. That's the whole premise of this program, and Lamar does it with excellence."

In the truck and on our way to our first stop, Rush and Gogue told some hair-raising Long Beach Vector Control stories: Once, someone fired up a lawn mower near where a beekeeper had released a hive of Africanized bees. The bees became angry and swarmed the beekeeper. The beekeeper later died from the incident.

On another occasion, Vector Control was summoned to help with a snake problem. They found a 30-foot Boa Constrictor, "whose head was as big as a football," said Gogue.

Vector Control also deals with rats and bats. "If you wake up and find a bat in your room," said Gogue, "go get treated for rabies immediately. The bat's bite is so small; you'll never know you got bit."

We arrived at our first stop; Sims' Biological Reserve, a natural run-off pond and seasonal wetland located near the intersection of Loynes Drive and Pacific Coast Highway. It is also a breeding site for the Culex, or Tule mosquito, which can be a carrier of the West Nile Virus. Rush and Gogue went about checking the ingeniously designed mosquito traps, which use carbon dioxide from melting dry ice to lure mosquitoes, which are then sucked into a net by a small fan.

Rush told the story of a resident living near the pond who called Vector Control complaining about mosquito bites. Rush checked the traps and found low mosquito counts, just one or two per trap. He went to the resident's home and discovered mosquitoes breeding in the stagnant water of the resident's own non-functioning fountain.

"Surveillance, education, and abatement: Those are our jobs," said Rush.

The next stop was the Los Cerritos Wetlands, on Westminster Avenue just west of Studebaker Road. Its barren landscape and creaky oil pumps created a distinctly old-West feeling.

"When it rains, this whole place fills up with water," said Rush.  "All you can see are the roads."

It was here that we met our first group of Sentinel Chickens.

In an elevated coop fortified with metal to keep coyotes out, these chickens and others in coops in different locations on the perimeter of the city are tested twice a month for West Nile virus. In 2014, Long Beach reported 58 cases of West Nile, which is carried first by birds, then by mosquitoes who feed on the birds and transmit the disease to humans. In 2018, the City reported zero cases of West Nile virus, the first time in nearly a decade.

Unlike other birds, the chickens don't die from West Nile virus. If they test positive, though, then Vector Control knows that this potentially deadly disease is back.

At our next location, near the harbor, we found Community Health Workers Samantha Castillo and Teresa Marmolejo performing blood tests on another batch of Sentinel Chickens. They also make sure the chickens are fed and provided with plenty of water.

Rush and Gogue pointed out the many Gambusia fish swimming in the shallow water and devouring mosquito larvae.

Our surveillance ride-along ended at DeForest Wetlands Park in North Long Beach, next to the river. We enjoyed the tranquil setting, watching ducks swimming and discovering beautiful purple and white moonflowers.

Rush, a Long Beach native who was a star tailback on the Poly High School football team in the '70s, took a moment to bask in the mid-morning breeze and reflect on his job.