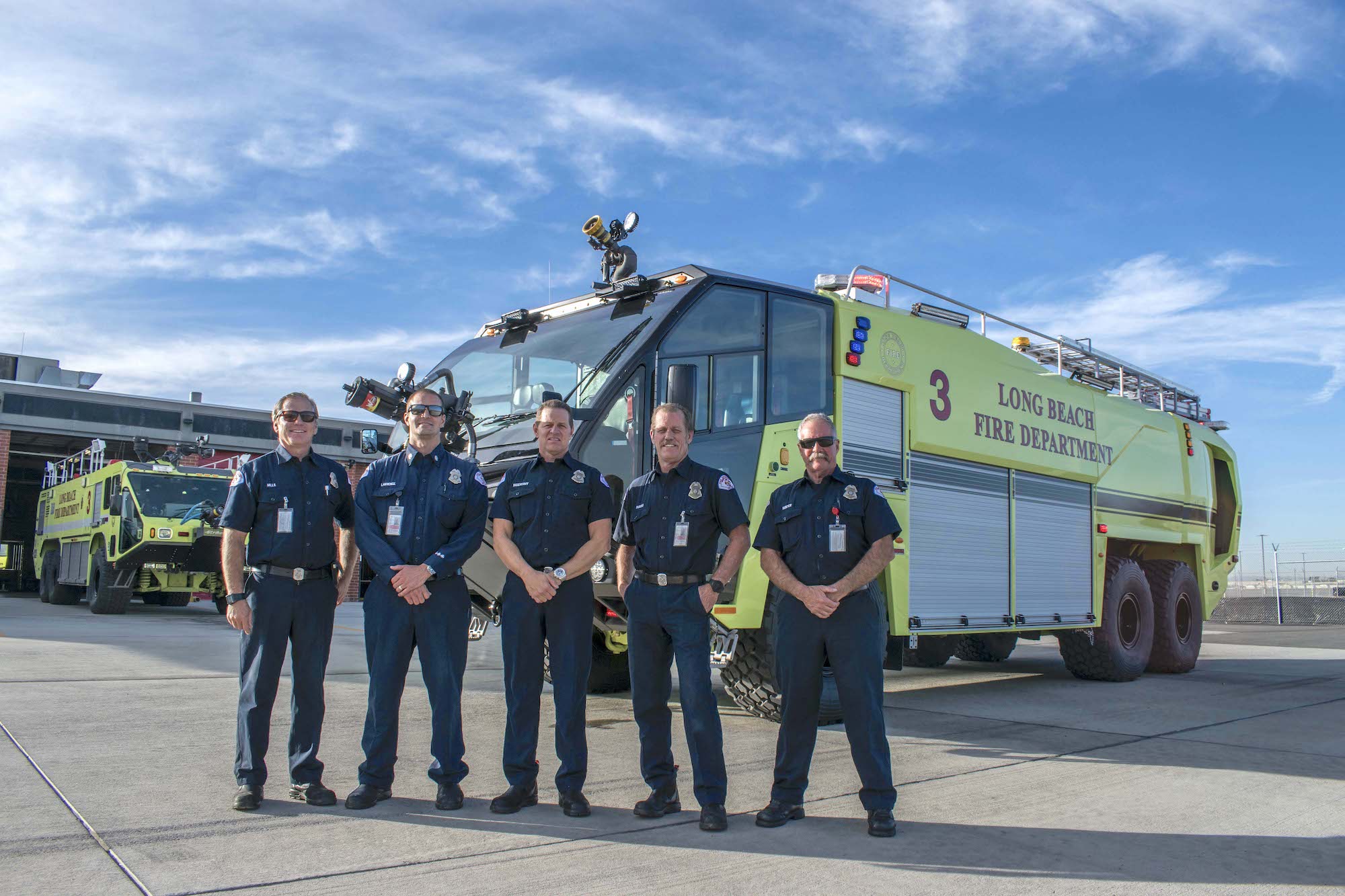 Long Beach, CA – On behalf of the City of Long Beach, Long Beach Airport (LGB) recently purchased a new Aircraft Rescue Fire Fighting (ARFF) vehicle, which will be operated by the Long Beach Fire Department (LBFD) and housed at Fire Station 16 next to the airfield.

“The City of Long Beach is constantly working to provide the best protection for residents and travelers coming into or out of our municipal airport,” said Mayor Robert Garcia.

The ARFF vehicle is a very maneuverable fire-fighting tool with rear steer capabilities and 360-degree cameras with infrared thermal imaging to help see through smoke and steam. The new vehicle is an Oshkosh Striker 6X6 model, which holds 3,000 gallons of water, up to 420 gallons of foam and 550 pounds of dry chemical extinguishing agent. It features a low attack bumper turret and a roof mounted turret capable of water dispersal at a level of 1,400 psi. It’s equipped with a fuel-efficient Scania Tier 4 Final engine.

“Firefighting and rescue technology continues to become more effective, efficient and sustainable,” said Long Beach Fire Department Battalion Chief Anthony DaSilva. “We are very excited to have the most advanced tools on our side.”

The replacement is based on LBFD’s existing ARFF vehicle, which has exceeded its useful life. The total cost for the new vehicle was $1.1 million dollars, the majority of which came from Passenger Facility Charges (PFC), a fee that airline passengers pay when they purchase their ticket.

“Having this state-of-the-art, life-saving technology at Station 16, which has direct access to the airfield, provides the best protection for travelers and our community in the event of an emergency,” said Long Beach Airport Director Cynthia Guidry.

LGB encompasses 1,166 acres and has three runways. It is unique among municipal airports for its diverse portfolio of Class A office buildings, retail, industrial facilities, a hotel and a municipal golf course.

About Long Beach Airport
Founded in 1923, Long Beach Airport (LGB) is the oldest airport in California. Among its many awards, LGB was named a Top 10 airport in the 2020 USA Today 10Best Readers' Choice travel award contest for Best Small Airport. LGB offers non-stop service to several U.S. cities while supporting a healthy general aviation community with more than 300,000 annual operations. The Airport is also a source of substantial economic activity and employment, with the LGB Aviation Complex generating $8.6 billion in economic impact and supporting 46,000 jobs. LGB is a self-supporting enterprise of the City of Long Beach and does not receive local tax dollars. The Airport prides itself in preserving its esteemed historic legacy and maintaining a safe, sustainable, and environmentally responsible operation. Follow us on Facebook, Instagram and Twitter @LGBAirport.