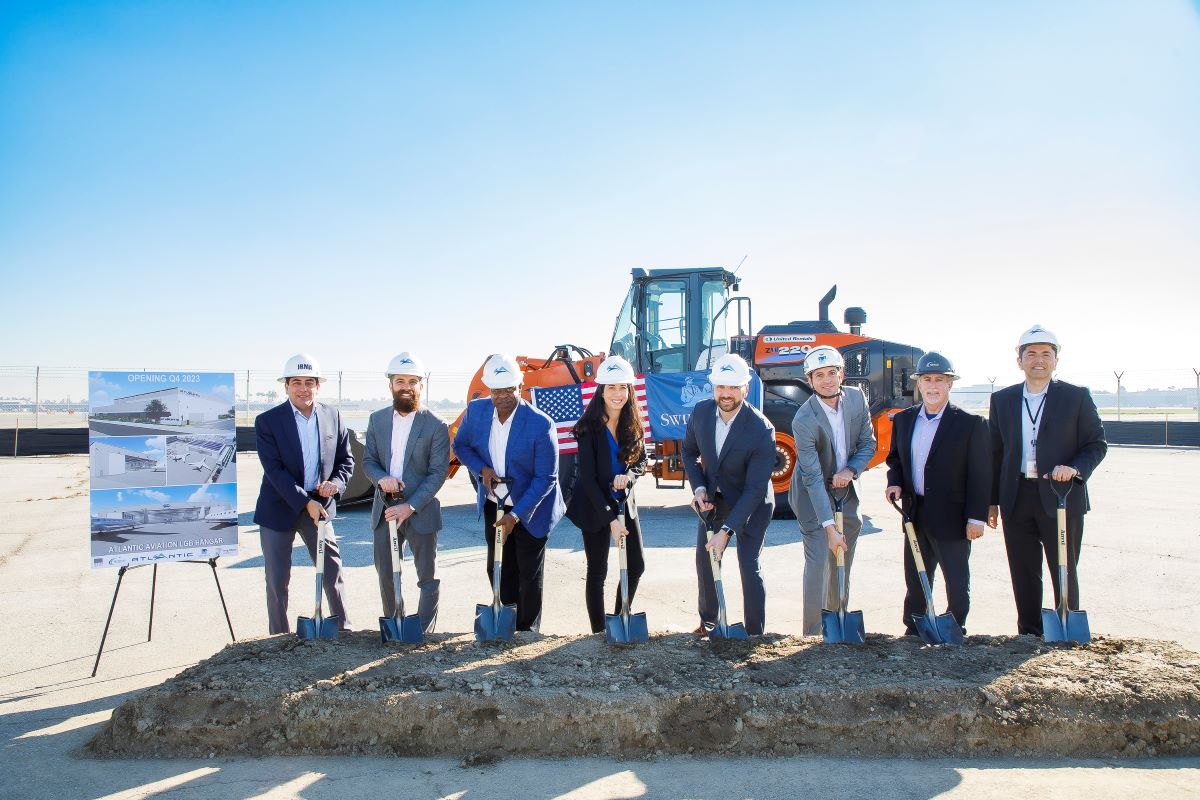 “We’re excited to see Atlantic Aviation expand its footprint and invest in Long Beach Airport,” said Mayor Robert Garcia. “Our award-winning airport is a huge part of our local economy, and we’re continuing to grow through the development of sustainable new facilities like this one.”

Atlantic Aviation, located at 3250 Airflite Way, is a fixed-base operator (FBO) that provides ground handling, fuel, hangar facilities and office space for business and general aviation. The company’s new and expanded first-class development will be located near its existing facilities on the west side of the airfield near Wardlow Road.

“This groundbreaking is a significant milestone for Atlantic Aviation, and one we’ve been working toward for several years,” said Brian Corbett, Chief Commercial and Sustainability Officer at Atlantic Aviation. “We’re proud to continue our investment in the Long Beach aviation community and to support our team’s growth ambitions. Most important, this development marks yet another major step toward our company’s goal of achieving carbon neutral operations.”

The additional solar panels on LGB’s campus come on top of a recently completed large-scale solar project at Aeroplex Group Partners, as well as the ongoing installation of solar panels atop LGB’s parking structures, which will soon generate enough renewable energy to supply 70% of the electricity used by Airport facilities.

The new Atlantic Aviation development project also includes plans for a large-scale public work of art with an aviation theme, as recommended in the Globemaster Corridor Specific Plan for development in area.

Slated for completion in the first quarter of 2024, construction is being managed by Aeroplex Group Partners, an aviation property development, consulting and management firm that also holds a lease at LGB.

“As a municipal airport, we take great pride in working with operators who continue to invest in our community through environmentally conscious innovations,” said Fifth District Councilwoman Stacy Mungo Flanigan.

LGB encompasses 1,166 acres and has three runways. It is unique among municipal airports for its diverse portfolio of Class A office buildings, retail, industrial facilities, a hotel and a municipal golf course. The Airport, recently named among the Top Ten airports in the country by Condé Nast Traveler magazine, currently offers nonstop service to 17 destinations across the nation by major airlines, in addition to robust general aviation operations.

Home to approximately 470,000 people, the multiple award-winning and innovative City of Long Beach offers all the world-class amenities of a large metropolitan city while maintaining a strong sense of individual and diverse neighborhoods nestled together along the California coast. As a full-service charter city, Long Beach is home to the Queen Mary, Aquarium of the Pacific, several museums and theaters, a highly-rated school district, Long Beach Airport, the Port of Long Beach, as well as many award-winning City departments such as Health and Human Services; Parks, Recreation and Marine; Development Services; Public Works and more. The City also has a highly respected university and city college, two historic ranchos, five hospitals, 12 libraries, five golf courses, 169 parks, miles of beaches, marinas, bike paths and a Bike Share program.

Founded in 1923, Long Beach Airport (LGB) is the oldest airport in California. Among its many awards, LGB was named one of the 2022 Top Ten airports in the country by readers of Condé Nast Traveler magazine. LGB offers non-stop service to several U.S. cities while supporting a healthy general aviation community with more than 300,000 annual operations. The Airport is also a source of substantial economic activity and employment, with the LGB Aviation Complex generating $8.6 billion in economic impact and supporting 46,000 jobs. LGB is a self-supporting enterprise of the City of Long Beach and does not receive local tax dollars. The Airport prides itself in preserving its esteemed historic legacy and maintaining a safe, sustainable, and environmentally responsible operation. Follow us on Facebook, Instagram and Twitter @LGBAirport.