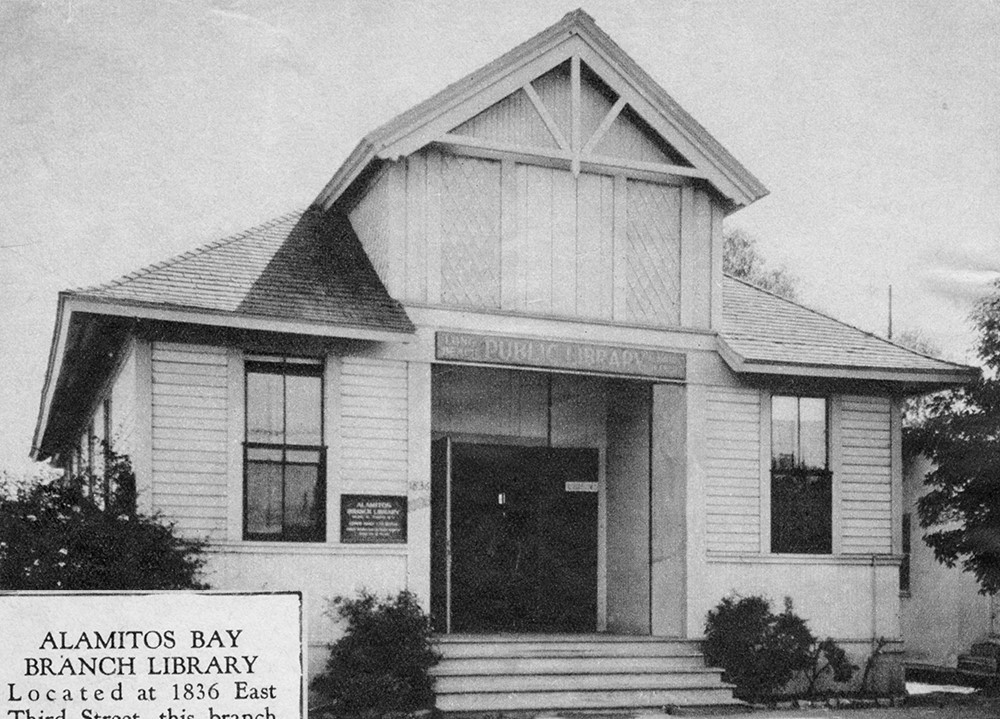 The original Alamitos library opened in 1897.

Settle in with a cup of tea and check out this fascinating story of Long Beach Public Library’s first branch, Alamitos. Here’s a coloring page for your little one(s) to keep them busy while you read.

In 1895, as the Long Beach Library Association was preparing to open the first public library in Long Beach, a similar group of public-spirited women in the adjoining Alamitos Beach township were busy organizing their own library association. Similar to the one in Long Beach, the Alamitos Library Association's aims were to create a center for the neighborhood’s cultural and social activities and to promote “social, scientific, and literary enterprises” in their rapidly growing community.

In the early days, the Alamitos Library Association met and housed their modest collection of donated books and magazines in the homes of Association members. As they hatched their plan for a library building of their own, they approached prominent local developer Jotham Bixby, Sr, about the situation. Bixby, eager to establish the legitimacy of the community he had invested in, agreed to have his Alamitos Land Company donate a plot of land on Bishop St. (now Third St.) to the Association. The property would come free of charge from Bixby, under the condition that the property be used only for library purposes in perpetuity.

With a vacant lot ready to go, the Association began plans to build. They held popular fundraising events, such as dances and masquerade balls, at members’ homes and barns to help raise money and excitement about the project. Though local suppliers sold them the building materials at discount prices, a number of the families of Association members signed on loans to secure the project's completion.

In April 1897, the Alamitos Library opened to fanfare and genuine local enthusiasm. While it was a simple, just-the-basics structure, the library building represented to locals the triumph of the pioneering spirit of the early residents of the community. As writer Mary Thurno noted in the late 1930s, looking at a photo of the library “conveys a more accurate impression of the tremendous progress of the community than any words can.”

The gala opening was attended by hundreds of people—virtually everyone in the entire neighborhood—and continued late into the night. As described by the early Long Beach newspaper, The Eye: “Twenty-six chickens were served with dishpan after dishpan and tray after tray of sandwiches, coffee and pickles. The music was the best in the country and when we say that we mean good. Mr. Cleaver in his violin playing furnished a treat and Miss Ada Dillon did fine execution with her voice. The wand drill by Miss Neville’s class was beautifully executed and the entire performance pleased.”

At opening, the library boasted around 500 volumes and was staffed by members of the Association acting as librarians.

When Alamitos was annexed into Long Beach in 1909, the building, lot, and operation of the library were soon transferred to the city of Long Beach, which continued service there as the first branch of the Long Beach Public Library.

With better funding and as a part of a larger system, the Alamitos library continued to grow in collection size and popularity. Previously open only three afternoons a week, by 1922, the library served the public six days a week, save for the one day a month the library would close to allow the Association to meet.

By 1927, bursting at the seams with some 10,000 volumes, it was clear the old building could no longer meet the rising demands of the growing neighborhood. As reported in The Sun that July: “One of the oldest structures in Long Beach, the Alamitos library, now inadequate and alleged to be a firetrap, as well as a ‘disgrace to the neighborhood,’ continues to be used for the purposes for which it was erected in 1897. This structure has not kept pace with the rapidly growing city, especially that section which was known as Alamitos when the building was constructed, but which is now one of the best residence sections of the city.” 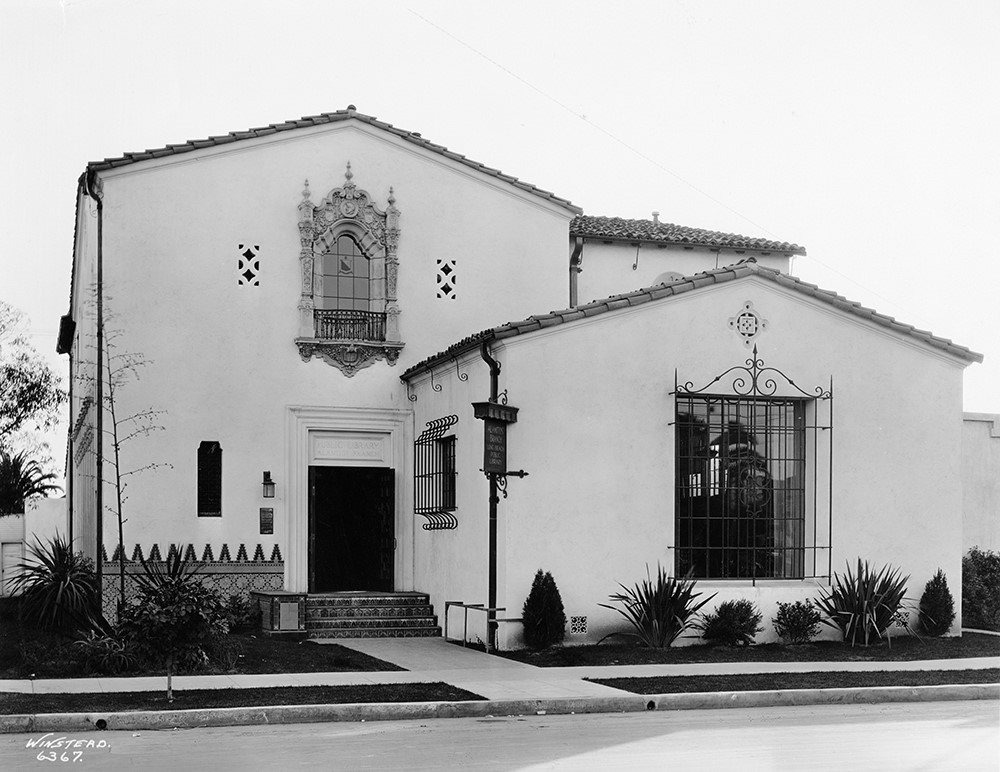 The current Alamitos library opened in 1929.

In 1928, service was temporarily discontinued at the location to construct a handsome new two-story building of old-world Spanish design, including an upstairs auditorium and a pleasant back patio area with a tiled fountain. The front windows included elaborate wrought iron grating that was reportedly an exact replica of that of a castle near Cordova, Spain. The new library, funded entirely by city oil revenue, opened in January 1929 with a 20,000 book capacity and a great deal of good will from the community. With a larger collection of popular fiction, expanded children's facilities and services, and more table spaces for readers, the library became more popular than ever. A newspaper clipping from the era boasted, "This is said to be one of the most artistic community library buildings ever constructed."

The branch continued to grow as a community hub and destination for readers and researchers for the next several years until the 1933 Long Beach earthquake. The devastating earthquake happened just before 6:00 pm on March 10, 1933, while the library was still open. (Please see sidebar.) Though no one was hurt at the Alamitos branch, the library suffered tremendous damage. Staffers were able to continue service off-and-on for the following months, either on the terrace or in the back patio.

Eventually, the building was declared unsafe and ordered closed by city officials until repairs could be made. Though much of the original appearance of the library was able to be preserved, the entire first floor was essentially replaced in 1937, and all brick walls were removed and replaced with steel and wood-frame concrete walls.

"It being near the dinner hour there were only a dozen or so patrons in the library. I was at the desk and the only other staff member on duty was Idris Own who was having his supper upstairs as he was to remain on duty till closing time, 9:00 pm.

"A minor shock preceded the major quake; a patron was at the desk and we looked at each other startled as the building began to shake. I think both of us felt at once that it was a pretty husky shake. The came the sharp, mighty north and south thrust that almost destroyed the city. Books began falling from the shelves as the shelves swayed in the tremor. Chandeliers--you know the large heavy ones at Alamitos--looked very formidable swaying and menacing. Then--I can only say it this way--the desk from which I had not moved, for I was simply frozen in my tracks with fear--leaped several inches from its place and I began to sway with the rest of the world. I reached out to catch hold of the desk to steady myself just as it 'leaped.' The floor by this time was on a decided slant and I was knocked down, or fell down, with a host of things falling all around me.

"When the major shock passed the patrons, all but one rushed for the door to get outside. I followed them. And when I returned to the building to see if anyone was wounded inside, or there were any children to be cared for, there in front of the desk stood a patron, entirely calm, with his book in his hand to be stamped for borrowing, just as if nothing in the world had occurred. I reached for the stamping pencil and made my hand stamp somewhere on the date slip, wondering all the time what manner of man this could be. My hand was trembling so I could hardly grasp the pencil and I know I stamped wide of the place where a stamp should be set. The patron smiled and thanked me and without another word left the building, entirely unruffled. It was exactly five minutes after the major shock. So Alamitos can claim the distinction of stamping out the last book to circulate that day, or of being the first to resume service after the quake, as you please to view it.

"With heavy recurrent quakes we all rushed outside again, and despite my assumption of apparent composure to serve the unruffled patron I had not recovered any poise to speak of. The library was a shambles. Bookcases were knocked over, catalog drawers were scattered about and chairs were overturned everywhere. Again outside a panic of fear seized me for the safety of Idris Owen, the young man on duty. Just then he appeared and with me returned to the all-but wrecked building to make quite sure no one was left there and to turn off gas and insure against fire. Fortunately, the quake occurred at the hour it did, else we would have had many school children present, and undoubtedly the story would indeed be tragic. Finding the building deserted the young man and I locked all the doors that would lock, took the cash box and left. We didn't know then, of course how many dead there were, or what a wreck the city was." 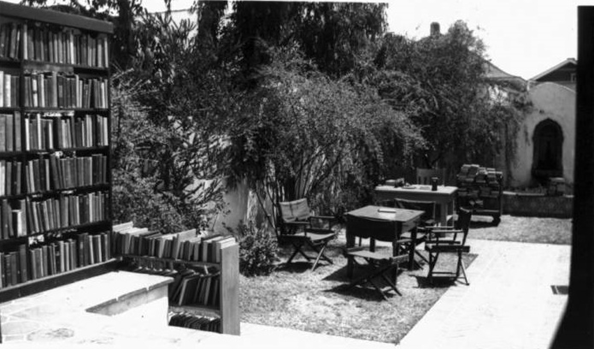 Library service at the Alamitos library moved temporarily to the patio after the 1933 earthquake.