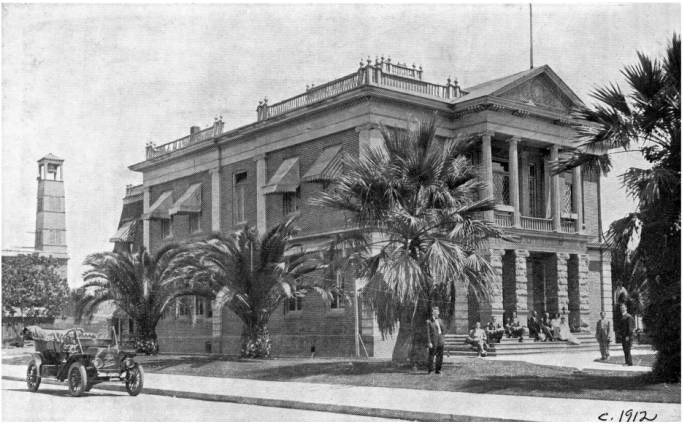 In 1895 a group of “patriotic and practical citizens” joined together to create the Long Beach Library Association in the hopes to provide the town’s 1500 residents with a library reading room. On January 1, 1896 they opened the first library in Long Beach in a kerosene-lit wooden shack on the ocean bluff between Pacific and Pine Street with a collection of 200 miscellaneous books from the First Congregational Church.

From these humble beginnings the City’s library system has grown to 12 locations, serving a population of more than 463,000 residents, and offering a collection of more than 800,000 items and a vast digital library available 24/7. Over the course of 2021, join us as we document and share major milestones from our history.

To meet growing public demand for improved library services in the rapidly expanding young town, the library moved in 1899 into the city’s new City Hall building, located on Pacific, between 1st and Broadway.

In 1901, the City Council appointed an official library board to oversee the library’s operation, and a special request was made for $500 in tax dollars to fund the library for one year. On January 1, 1902, the Long Beach Public Library became a free, tax-supported institution.

Almost immediately the library outgrew its space in City Hall and a new, larger building was needed to meet demand. Funds for a new library building were offered by Andrew Carnegie, known as “The Patron Saint of Libraries” because he funded the building of 2,509 libraries worldwide. On September 5, 1908, the cornerstone of the new Carnegie Public Library was laid and on June 14, 1909, the new Carnegie library was dedicated in Pacific Park.

Alamitos Neighborhood Library will be our next feature. Until then, find 125 Reasons to Celebrate Your Library, enjoy 125 Great Books to Celebrate, and dust off your knowledge of LBPL history with this puzzle.