Alamitos, Brewitt, and Dana Neighborhood Libraries are currently offering LBPL To-Go services only. Patrons may pick up holds and return materials. Browsing, restrooms, printing, copying, and computers are not available at this time.

Face masks covering nose and mouth are recommended for all patrons when in library buildings. 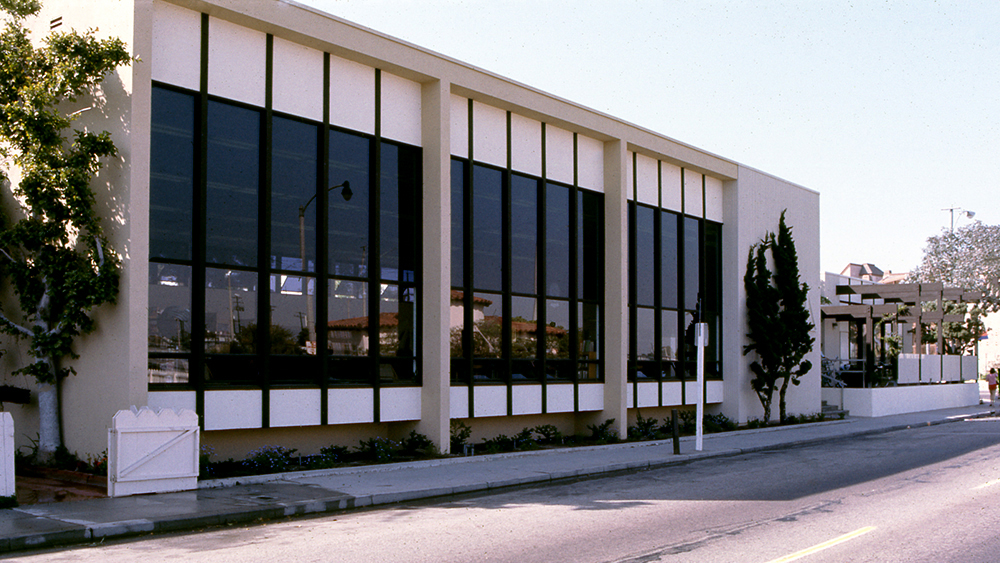 Settle in for another installment of our branch histories, in celebration of our 125th Anniversary. This time around, we're focusing on everyone's favorite beach-side retreat, Bay Shore Neighborhood Library. After you finish reading, don't forget to download the Bay Shore coloring page and share your creations with us on social media!
The 1920s saw a tremendous boom in construction throughout Long Beach, not the least of which in the beachy eastside neighborhoods of Belmont Shore and Naples, where developers hyped the area as the “greatest project in the city’s history.”

In September 1929, as the community grew, the first Bay Shore Library opened in a room of a store building at 194 Corona Ave, just south of E. 2nd St. at the intersection of E. 2nd St. and Corona Ave.

Bay Shore, the sixth branch of the Long Beach Public Library system, started with a collection of just 1000 books. The collection would triple in three years in an effort to meet the library’s growing popularity. Indeed, as the Great Depression started to make itself felt in Long Beach, library use citywide ballooned almost 20% in a year. Several branches, including Bay Shore, noted a nearly 50% increase in circulation from May 1931 to May 1932.

At 3000 books, it was determined that not a single extra volume could be added to the jam-packed shelves. On November 1, 1932, the Bay Shore branch reopened in a new location down the street, in an office building at 5205 E. 2nd St., near Nieto Ave. 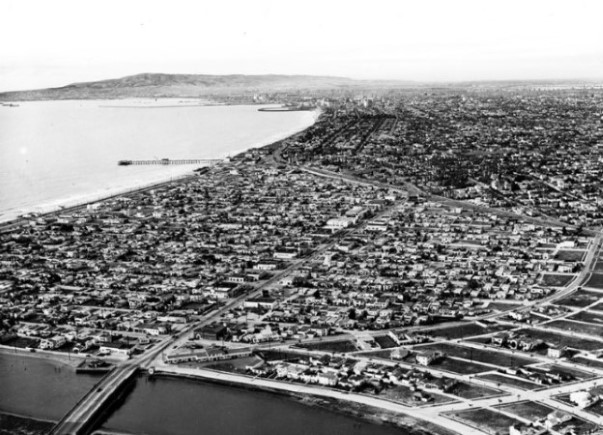 The Belmont Shore area circa 1940. 2nd Street runs diagonally across the center of the photo. Bay Shore Ave. is the first street across the bridge at the bottom of the photo.

Just a few months later, in March 1933, the Long Beach earthquake wreaked large-scale devastation, toppling scores of buildings and killing 115 people.  One such person was Pearl Miller, the 44-year-old Children’s librarian at the nearby Belmont Branch, who was killed by falling debris as she tried to exit the library during the quake.

Thankfully, no one was seriously injured at Bay Shore, though the earthquake caused enough damage  to put the branch out of commission for a time.  In February 1934, the library moved again, this time to a larger unit in the same building, at 5101 E. 2nd St.

In the late 30s and into the 40s, Bay Shore developed into one of the most used branches in the system, boasting the highest nonfiction circulation as well as the highest Children’s storytime attendance.  The Bel-Na-Mos newspaper observed that Bay Shore clientele were “undoubtedly one of the most progressive and literary-minded in the city.”

In 1940, desperately needing still more room, the branch made its move to the highly trafficked corner of E. 2nd St. and Bay Shore Ave, directly across the street from the public beach of Alamitos Bay. 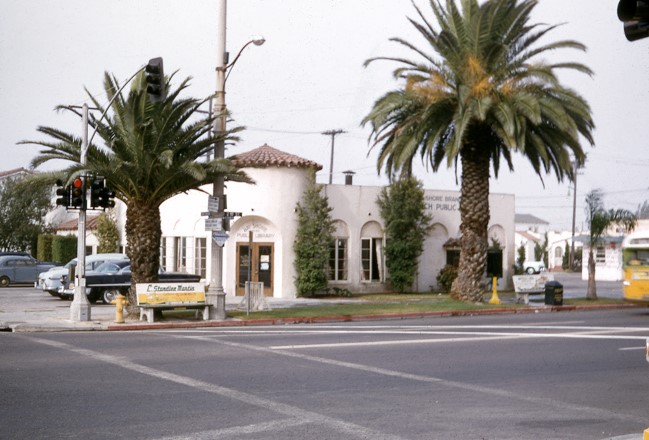 5390 E. 2nd St. was one of the oldest buildings in Belmont Shore and had previously been home to the nightclubs the Bay Shore Inn and the Triangle Club. The formal branch opening on July 2, 1940 was sponsored by the Boosterettes, a Belmont Shore women’s civic organization, and featured a fashion show and a puppet show.

LBPL, which had thus far been renting Bay Shore locations, was able get the city to purchase the lot and building for $15,000 in July 1941.

Though the location was in many ways ideal—branch manager Judson Voyles later said it was “what envious local business men call the best site in Belmont Shore”—the building, which was ill-designed to be a public library, was showing its age. In the late 1950s, the old building was demolished and a larger, modern library building was constructed in its place. 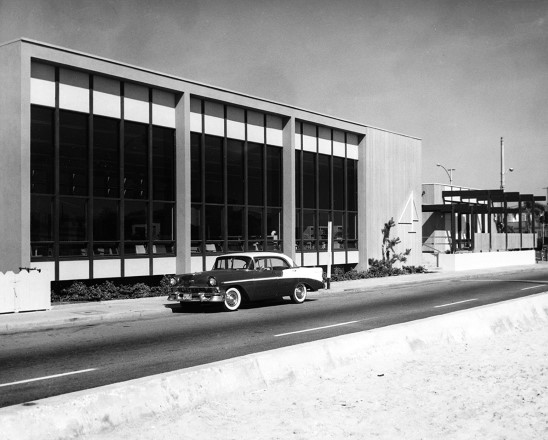 The Bay Shore branch shortly after its opening in 1959. Though built on the same lot, the new library’s address was now 195 Bay Shore Ave.

The new Bay Shore library debuted on April 24, 1959, with some 600 locals in attendance. The new building’s exterior was glass, stucco and unfinished California redwood. “In the salt air, the redwood will soon weather to a soft gray,” wrote Voyles in Library Journal in 1959. “The entire structure, laid on a concrete slab, is three feet above street level. This reversal of standard modern doctrine was thought wise because the building is across the street from a beach whose high tides have risen within inches of the street.”

Noted artist and children’s book author Taro Yashima agreed to contribute art for the library. His five-painting series “Young Lives Under the Sun” remains on display in the Children’s area. 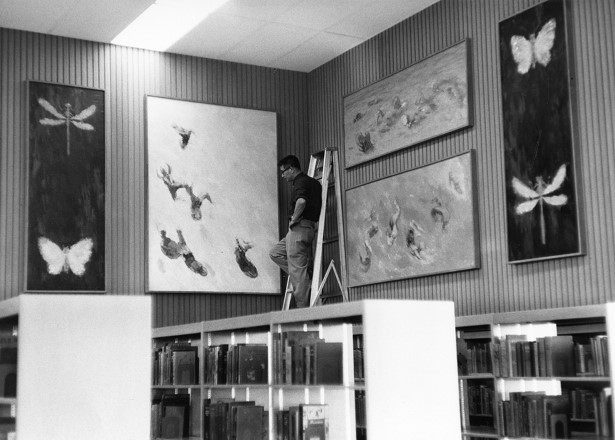 Artist Taro Yashima installs his work in the Children's area of the not-yet-opened library in 1959.

Another feature of the new library was a “lovely” reflecting pool with fountain, located on the terrace.  Unfortunately, it was soon decommissioned as beachgoers consistently used it to rinse their feet off and the fountain was often the object of mischief. 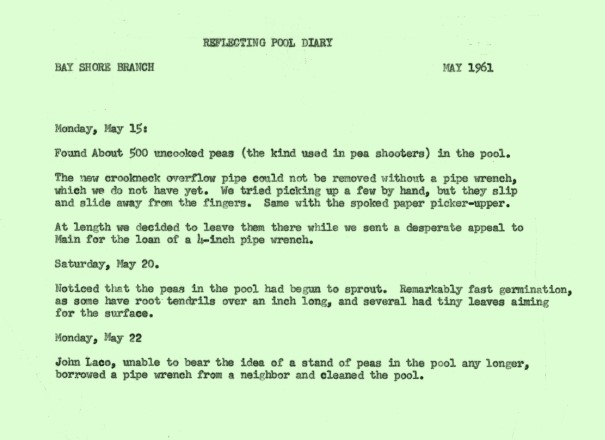 At opening, the library was not equipped with air conditioning.  Instead, "a forced-air system will pump bay air into the building continuously, providing a complete exchange of air every three minutes,” according to a description in the Press-Telegram.  Air conditioning was installed in the late 1990s. 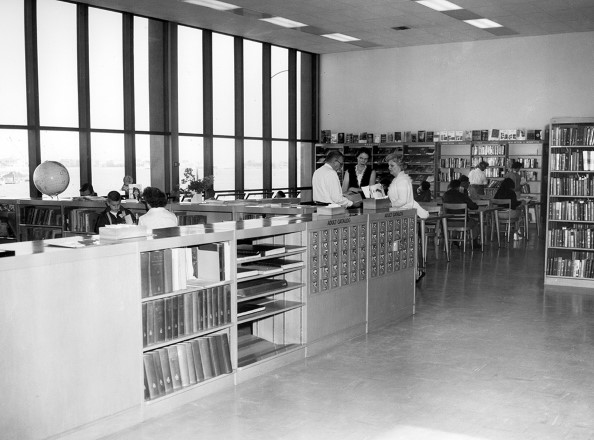 Inside the Bay Shore library, March 1960.