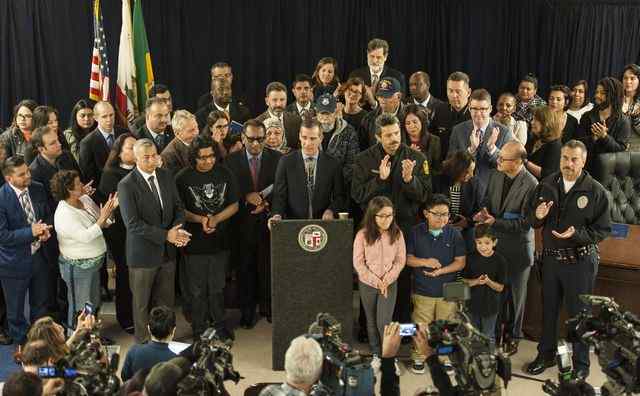 
Long Beach Mayor Robert Garcia, who emigrated from Peru at age 5, joined dozens of his mayoral counterparts Tuesday to call on Congress and President Donald Trump to fix a “broken” immigration system and pass a comprehensive overhaul of how people are granted entry into the country.

Los Angeles Mayor Eric Garcetti, Anaheim Mayor Tom Tait and many others called for immigration reform, a day after U.S. Immigration and Customs Enforcement officials took their own action in targeting “non-cooperative” cities.

The agency released its inaugural weekly report on cities or agencies that have rejected federal immigration detainer requests to hold people in local jails past their release dates. The report, which mentioned detainers that appeared to have been issued and rejected at Los Angeles and Anaheim jails, was prompted by an executive order signed by Trump in January.

During a teleconference Tuesday to discuss the mayors’ “day of action,” Garcia said his family benefited from President Ronald Reagan’s amnesty program that allowed the undocumented a path toward citizenship, and he wanted to share that “immigrants also grow up to become mayors.”

“People don’t realize that the immigration process and the path to citizenship — it is not easy,” he said. “It took us probably 10 years of going to offices, getting advice, waiting in lines, working with caseworkers to ensure that we were doing the process correctly.” Garcia said he was 21-years-old and “coming out of college” when he and his family became U.S. citizens.

“The day I became a citizen was the best day of my life, and it instilled a value of loving your country, working hard and giving back,” Garcia said. “To the president and the members of Congress, all those young people out there, all those families that are out there, they want to be able to have the opportunity that so many other immigrants like myself and my family had.“