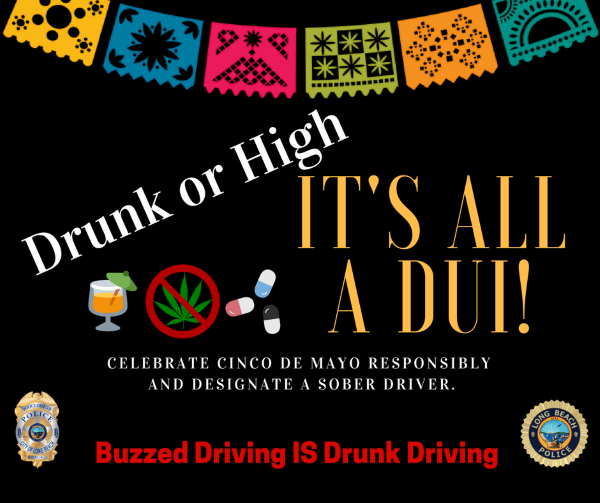 In the United States, the Cinco de Mayo holiday is often associated with parties and alcohol. If you’re celebrating with friends and family this weekend, remember that at the end of the night, you need to have a safe and sober ride home. The Long Beach Police Department, Sheriffs and the CHP will be out in force looking for the tail-tell sign of impaired driving this weekend.

In the rush to prepare for a night out, it’s easy to forget the most important Cinco de Mayo plan of all: designating a sober driver. Some may think they can play it by ear and wait until after the party has started to decide whether they’re “okay to drive.” By this point, it’s too late. Going out for a night of drinking without a plan for getting home safely is a recipe for disaster.

Long Beach Police Department will deploy additional officers on special DUI Saturation Patrols specifically to stop and arrest drivers showing signs of alcohol or drug impairment during the hours of 6:00 PM and 2:00 AM, in areas with history of DUI crashes and DUI arrests.

In recent years, California has seen an increase in drug-impaired driving crashes. Long Beach Police Department supports the new effort from the Office of Traffic Safety (OTS) that aims to educate all drivers that “DUI Doesn’t Just Mean Booze.” If you take prescription drugs, particularly those with a driving or operating machinery warning on the label, you might be impaired enough to get a DUI. Marijuana use can also be impairing, especially in combination with alcohol or other drugs, and can result in a DUI.

Remember: Buzzed Driving Is Drunk Driving, and when you drive impaired, you run the risk of killing yourself or someone else. You will be looking at jail time, the loss of your driver’s license, higher insurance rates, and dozens of other unanticipated expenses ranging from attorney fees, court costs, car or motorcycle towing and repairs, and lost wages due to time off from work. The average DUI costs about $10,000. Wouldn’t you rather pay for a ride home?

There are many other ways to ensure a safe ride home besides relying on a friend. The OTS DDVIP app is now available for free download on iOS and Android devices. The app offers enhanced features, allowing users to search all participating bars and restaurants throughout California. Additionally, the app users can easily order a sober ride from a commercial ride-sharing service.

Drunk driving is claiming too many lives. On average in 2016, someone was killed in a drunk-driving crash every 50 minutes. On Cinco de Mayo weekend, that equaled 51 lives lost in drunk-driving crashes in the nation. So, if you choose to drink this Cinco de Mayo, make sure you have a designated sober driver or have arranged another safe way home. Decide today that you won’t ever drive after drinking or impaired by drugs. If you know someone who is about to drive buzzed or ‘high’, step in and help. Take their keys and help them make arrangements to get home safely.

A final statistic to remember: drunk-driving deaths are 100-percent preventable.

This enforcement effort is funded by a grant from the California Office of Traffic Safety, through the National Highway Traffic Safety Administration, and remember - Report Drunk Drivers - call 911.