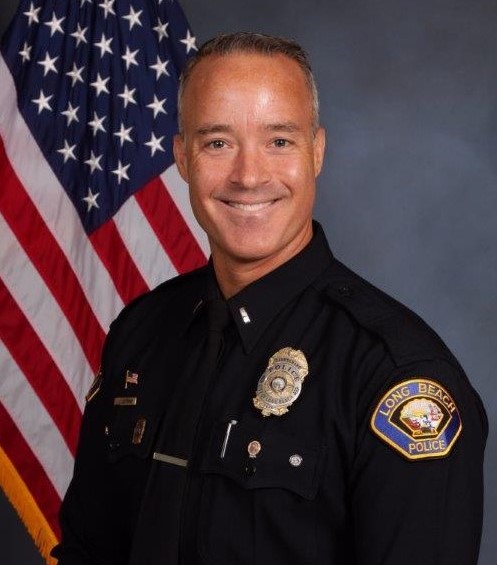 The Long Beach Police Department is proud to announce the promotion of several employees that took place at a ceremony held today at the Terrace Theater.

Command Staff level promotions included Commander Alex Avila who was promoted to Deputy Chief and will assume command of the Support Bureau. Lieutenant Jeffrey Liberman was promoted to Commander and will oversee the Security Services Division (see bios below).

All employees promoted at today’s ceremony are as follows:

Deputy Chief Alex Avila
Deputy Chief Avila, a 27-year veteran of the Long Beach Police Department, began his career as a police officer in 1990, and promoted to the rank of Sergeant in 1999, Lieutenant in 2006, and Commander in 2012.

Commander, Training and Communications Division Commander, and he most recently oversaw the Security

Services Division. Deputy Chief Avila holds the distinction of being the only person to be assigned to the department’s Gang Enforcement Section as a Detective, Sergeant, and Lieutenant.

Deputy Chief Avila holds an Associate of Arts Degree in Administration of Justice from Long Beach City College, a Bachelor of Science degree in Occupational Studies, and a Master of Science degree in Emergency Services Administration from California State University, Long Beach. He is a graduate of University of Southern California Delinquency Control Institute, the Sherman Block Supervisory Leadership Institute, the F.B.I. Executive Leadership Course, and the F.B.I. National Academy.