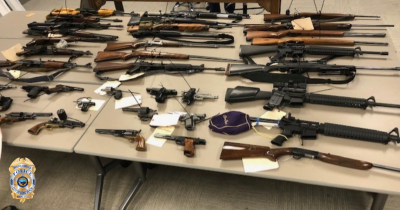 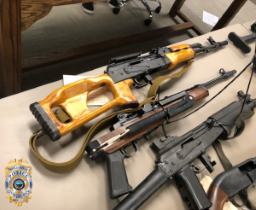 Images of firearms seized during seizure in Whittier, CA
Click on each image to enlarge

The Long Beach Police Department’s (LBPD) Gang Investigations Detail has been working to proactively investigate the illegal possession of firearms in effort to decrease firearm related crime in the city. Year to date, over 940 firearms have been seized citywide.

Through the utilization of “Neighborhood Safe Streets” funding available through Measure A, detectives assigned to a Prohibited Possessor Team are identifying prohibited possessors of firearms and following up on all leads involving crimes of gun violence. The team has been partnering with local and federal law enforcement agencies such as the Los Angeles County District Attorney’s Office, the California Department of Justice Firearms Bureau and the Bureau of Alcohol, Tobacco, Firearms and Explosives (ATF) to enhance investigative and prosecutorial efforts by identifying and arresting both prohibited possessors and those in possession of illegal firearms.

Prohibited possessors are individuals who have been convicted of all felonies, such as assault with a deadly weapon or felony drug related offenses, certain misdemeanors, suspects of domestic abuse, and certain individuals with a history of severe mental illness. Once the individual has been determined to be a prohibited possessor, they are given a specific amount of time, typically 24-48 hours, to either turn their weapons in to a local law enforcement agency or sell them. Through partnership with the Los Angeles Superior Court, detectives are utilizing court records to identify individuals who have not relinquished their firearms, locate them and seize their weapons.

Detectives also conduct compliance checks of subjects who are on parole, probation and Post Release Community Supervision. If weapons are located during these checks, the individual is arrested for the violation and the weapons will be seized.

This team also focuses on identifying individuals who own illegal firearms, as defined under California Senate Bill 23. The bill established criteria for defining assault weapons by providing descriptive definitions concerning the capacity and function of the weapon.

“We are very pleased with the success of this initiative and the hard work these detectives are doing to continue to reduce violent crime, focusing on illegal possession of firearms,” said Police Chief Robert G. Luna. “Their efforts will not end here, as we plan to continue to utilize this initiative as a tool to make additional seizures and arrests in and around our city.”

In the last week alone, detectives worked with the ATF to seize 54 firearms in the City of Whittier. The investigation, which also included Homeland Security Investigations and the Los Angeles County Sheriff’s Department, led to the arrest of 62-year-old Patrick C. Ingala for a federal weapons violation.

The LBPD is grateful to the City Council and Public Safety Committee who once again allocated “Neighborhood Safe Street” funding through this fiscal year. This funding is allocated to all patrol divisions for each commander to identify issue areas and mitigate through additional officers. In the upcoming weeks, you will continue to see increased patrols throughout the City in response to recent violent crime. In combined efforts between the Investigations Bureau, including Gang Detail detectives and the Prohibited Possessor Team, and patrol direct enforcement resources, we will work to increase the safety of our City and surrounding communities by continuing to remove illegal firearms from our streets.