The Long Beach Police Department (LBPD) Traffic Section conducted a DUI/Drivers License checkpoint on Friday, June 25, 2021, at Pacific Coast Highway and Loynes Street, between the hours of 6:00 p.m. and 2:00 a.m. Checkpoints are placed in locations that have the greatest opportunity to deter driving under the influence and provide the greatest safety for officers and the public.

• 1750 Vehicles through checkpoint
• 352 Drivers screened
• 2 Drivers arrested for DUI
• 0 Drivers cited for operating a vehicle with a suspended/revoked license
• 4 Drivers cited for being unlicensed
• 7 Citations issued for unsafe driving
• 1 Driver fled checkpoint, the vehicle was found, and the driver was identified. A handgun and narcotics were recovered inside the vehicle.

Drivers caught driving impaired can expect the impact of a DUI arrest to include jail time, fines, fees, DUI classes, license suspension, and other expenses that can exceed $10,000 not to mention the embarrassment when friends and family find out.

The checkpoint was funded by a grant from the California Office of Traffic Safety, through the National Highway Traffic Safety Administration, reminding everyone to ‘Report Drunk Driver – call 9-1-1. 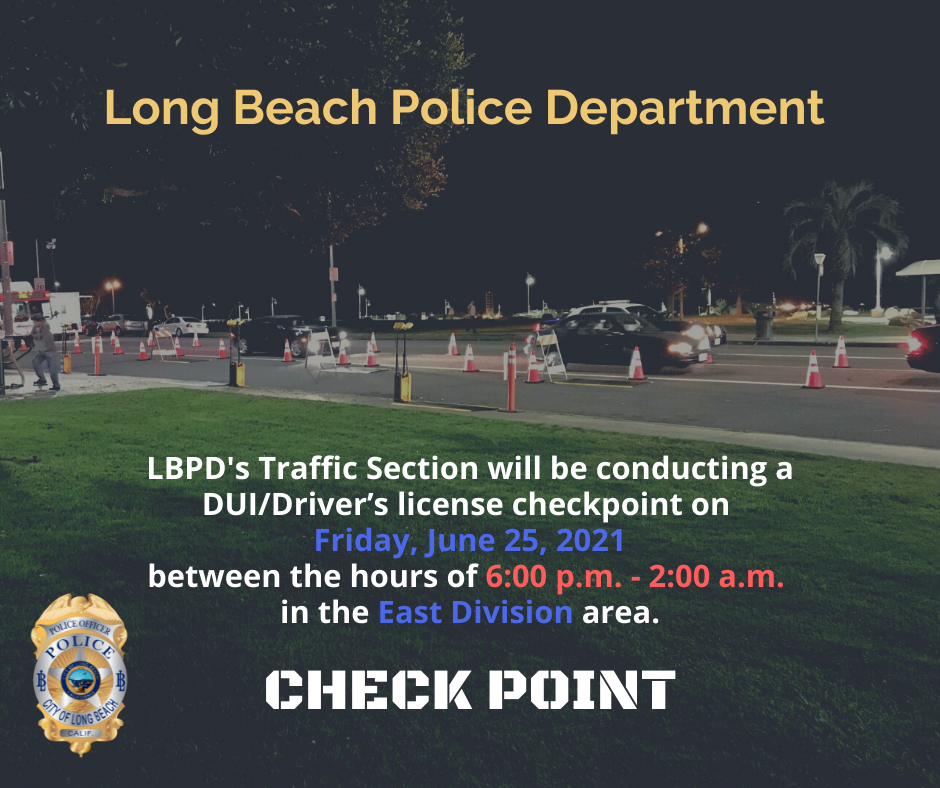 The Long Beach Police Department will hold a DUI Checkpoint on June 25th from 6:00 p.m. to 2:00 a.m. in the East Patrol Division.

“The safety of our community is and always will be our mission,” Lt. Kris Klein said. “We are still out there looking for impaired drivers because driving under the influence is still dangerous.”

Long Beach Police Department reminds the public that impaired driving is not just from alcohol. Some prescription medications or over-the-counter drugs may interfere with driving. Always follow directions for use and read warning labels about driving or operating heavy machinery, which includes driving a car. While medicinal and recreational marijuana are legal, driving under the influence of marijuana is illegal.