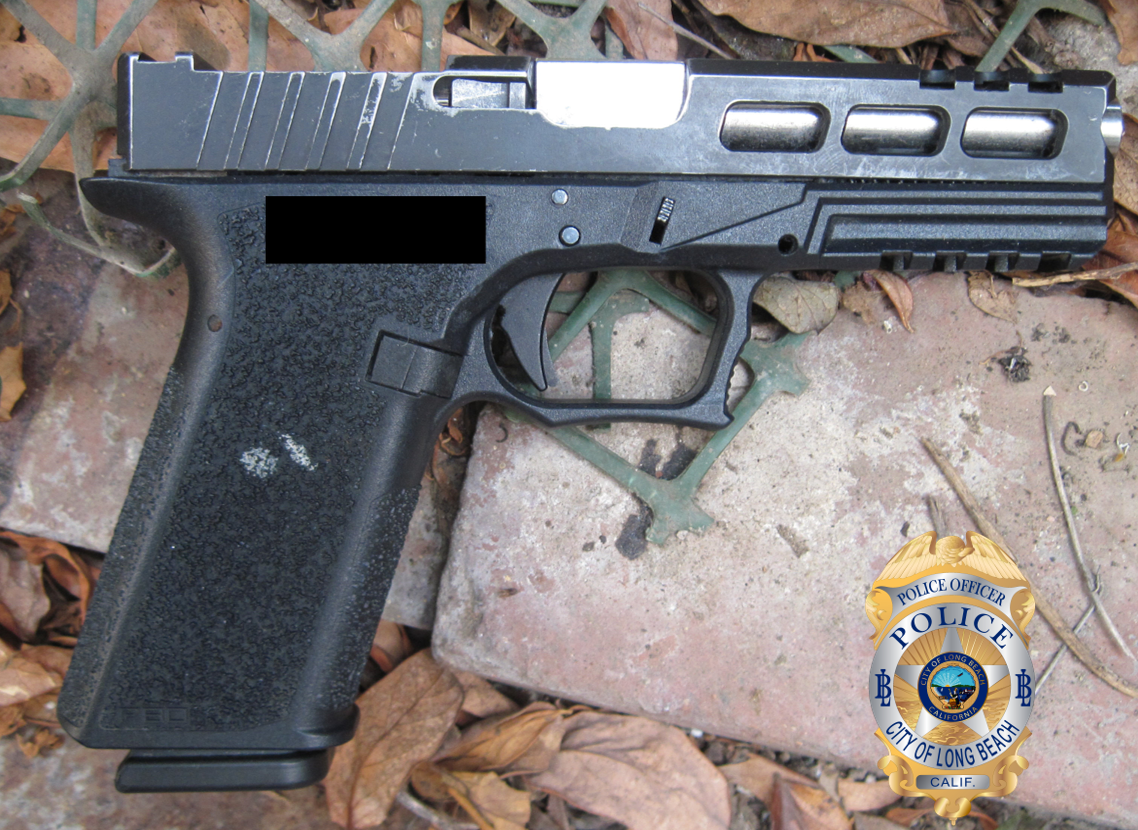 The firearm recovered at the scene.
CLICK ON PHOTO TO ENLARGE

On October 5, 2020, at approximately 2:15 p.m., detectives searching for a murder suspect attempted a traffic stop on a suspect from the August 4, 2020 murder of 40-year-old Juan Moreno of Long Beach. When detectives initiated the traffic stop in the area of 7th Street and Rose Avenue, the vehicle fled and failed to yield, resulting in a short vehicle pursuit.

Within a minute of the pursuit being initiated, the suspect vehicle collided with two other vehicles, one occupied and one parked in the 900 block of Cerritos Avenue. The driver then fled from detectives on foot through the residential neighborhood. Detectives observed the suspect holding a firearm in his hand as he ran. No injuries were reported as a result of the collision.

Detectives pursued the suspect on foot until he was apprehended without incident on the 1200 block of East 8th Street. Detectives located the discarded firearm in a private yard adjacent to Craftsman Village Park. The loaded firearm will be processed by the Long Beach Police Department’s Forensic Sciences Division.

Through their investigation, detectives learned the victim and suspect were involved in an altercation with each other prior to the shooting and were known to each other.

The suspect has been identified as 48-year-old Richard Young of Long Beach. He was booked on one count of murder and one count of ex-felon in possession of a firearm and is currently being held in the Long Beach City jail on $2,000,000 bail.

The case will be presented to the Los Angeles District Attorney’s Office for filing consideration later this week.

On August 4, 2020, at approximately 4:15 p.m., officers were dispatched to the 700 block of Cerritos Avenue regarding a shooting, which resulted in the death of a male adult.

Upon arrival, officers located a male adult laying in the alley with gunshot wounds to his upper torso. Long Beach Fire Department personnel responded to the scene and began life saving measures. The victim was later determined deceased at the scene.

At this time, the victim is only being identified as a male adult pending notification to next of kin by the Los Angeles County Coroner’s Office.

The exact motive for the shooting is currently unknown, however the victim and suspect were in involved in an altercation with each other prior to the shooting. The suspect is being described as a male adult who fled the area before officers arrived on scene. Detectives are actively working to gather additional information to further the ongoing investigation.

Anyone with any information regarding the incident is urged to contact LBPD Homicide Detectives Shea Robertson or Travis Harris at (562) 570-7244. Anonymous tips may be submitted through "LA Crime Stoppers" by calling 800-222-TIPS (8477), downloading the "P3 Tips" app to your smartphone (available at the Apple app store or Google Play), or by visiting www.crimestoppers.org.
This information is preliminary and is intended for early information use rather than being a formal investigative report.