UPDATE (9/18/16): On September 17,2016, Maria Mendoza passed away at a local hospital from injuries sustained in the hit and run collision.

UPDATE (9/15/16): On September 15, 1016, at approximately 11:00 a.m., Long Beach Police Collision Investigations Detectives made an arrest in the hit and run collision that left Maria Mendoza in critical condition. Detectives arrested 83-year-old Edward Peterson of Long Beach, at his residence. He was booked into the Long Beach Jail for felony hit and run with bail set at $50,000.00. The involved vehicle, registered to Peterson, was located at his residence and impounded as evidence.
Detectives were able to locate Peterson after receiving a tip from the public. The Long Beach Police Department would like to thank the media for sharing this information with the public. The investigation remains ongoing. 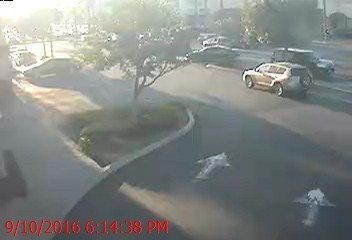 Actual Suspect Vehicle
Link To Video of Suspect Vehicle:  https://www.youtube.com/watch?v=lqkTJX1BCvI
On Saturday, September 10, 2016 at approximately 1814 hours, officers were dispatched to Willow Street and Long Beach Boulevard regarding an injury hit and run traffic collision between a vehicle and a pedestrian, which resulted in the critical injury of the pedestrian.

When Officers arrived on scene, they discovered the pedestrian lying unconscious on Willow Street being treated by Good Samaritans already on scene. The pedestrian was transported by Long Beach Fire Department Paramedics to a local hospital where she is listed in "Very Critical Condition".

The preliminary investigation revealed that a champagne or beige colored smaller SUV struck the pedestrian in the crosswalk. After viewing video from surveillance cameras in the area it was determined that vehicle, was possibly a Toyota Rav-4, with no cover on spare tire. It also appears that the vehicle failed to stop for the red light while traveling west on Willow Street at Long Beach Boulevard and eventually striking the pedestrian while she crossed southbound Long Beach Bl. west of Willow Street.

Witnesses on scene described the driver of the vehicle to be an elderly male white with gray hair.

The pedestrian has been identified as Maria Mendoza a 59-year-old female resident of Compton. She remains in very critical condition at a local hospital.

Anyone who may have information regarding this incident is asked to call Long Beach Police Department Collision Investigation Detail Detective Steve Fox at (562) 570-7355.