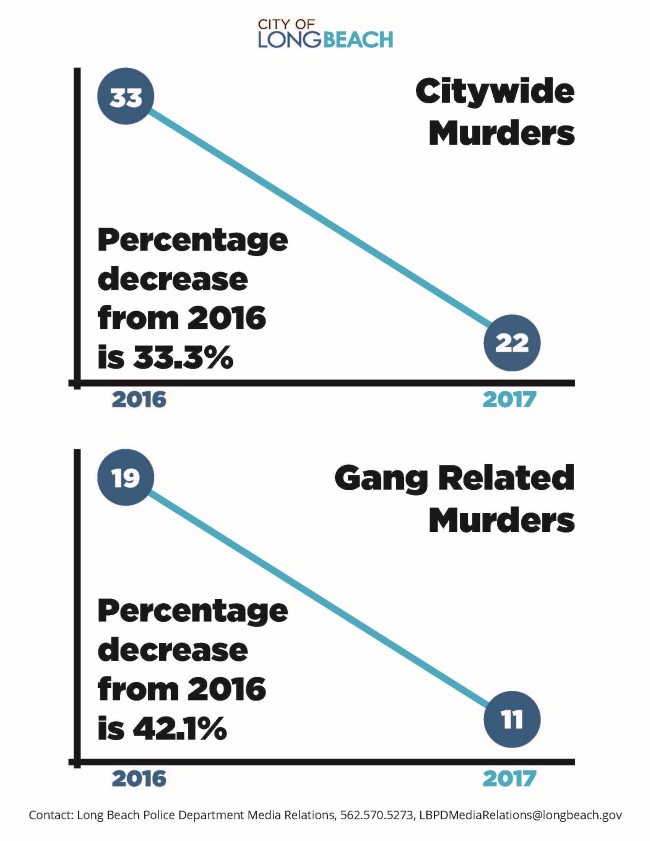 “This historic reduction in homicides is a huge win for the people of Long Beach,” said Mayor Robert Garcia. “The city has dramatically become safer over the last decades thanks to the men and women of the LBPD and community partnerships. Every life lost is still a tragedy, so we will continue to press on to make Long Beach even safer.”

“We are very pleased with the significant drop in murders and the continued overall reduction in citywide crime,” said Chief of Police Robert Luna. “The noticeable decreases are a true testament to the dedication and the incredible work that our employees do every day. We work together in partnership with our community and other City Departments, as well as numerous law enforcement entities in an effort to reduce crime and improve the quality of life for residents and visitors alike.”

The Long Beach Police Department (LBPD) has experienced a significant drop in gang related murders with a 42.1% decrease from 2016 due to enhanced gang enforcement efforts, which include a dedicated detective to apprehend prohibited possessors, and continued law enforcement partnerships with the Bureau of Alcohol, Tobacco, Firearms and Explosives (ATF) and the United States Department of Justice (DOJ) to remove guns off the streets. Additional strategies include: