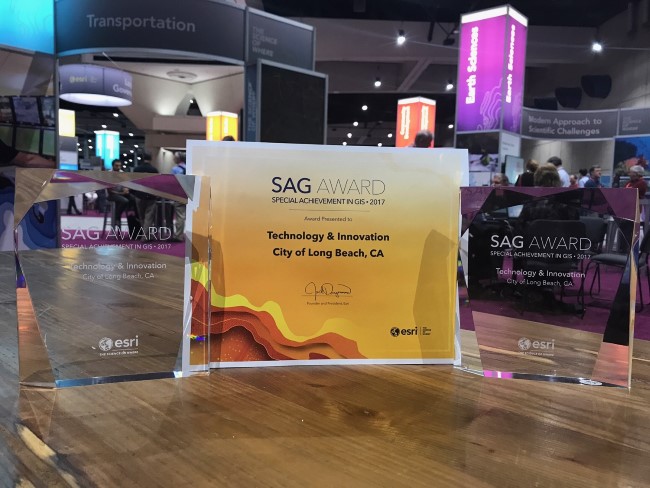 The City of Long Beach has received a 2017 Special Achievement in Geographic Information System (GIS) or SAG Award for its DataLB portal, an innovative application of technology, data collection, and geospatial information visualization. Esri, the global leader in spatial analytics, selected the City from more than 300,000 eligible candidates and presented the award at the annual Esri User Conference in San Diego.

"We're committed to transforming Long Beach into a 21st century city,” said Mayor Robert Garcia. “Our data portal is opening up government to citizens and entrepreneurs to assist us with creating smarter solutions to our major challenges."

In 2016, the City of Long Beach recognized Open Data as a critical component for improving the city’s overall economic development, citizen engagement and government transparency. In line with this innovative mindset, the City of Long Beach broke new ground and became one of the first cities to embrace Open Data in an interactive and public way through the January 2017 unveiling of DataLB, a collaborative effort between Esri and the Technology & Innovation Department.

“DataLB is an innovative approach that connects individuals, organizations and communities through data and engagement,” said Bryan M. Sastokas, Chief Information Officer. “By leveraging DataLB relationships with this ecology we are implementing a revolutionary way that is truly empowering, and we are very excited to be recognized for these efforts.”

DataLB brings together regional and global data, giving the public a better understanding of what the government is doing through detailed geospatial datasets, and providing information such as where City projects will be funded. This portal integrates data, maps, and charts to tell a story and help the City make more informed data-driven decisions. Additionally, the Application Programming Interface (API) function of the portal allows for the development of new applications.

"The SAG Awards provide a great opportunity to showcase all the outstanding achievements of our users," said Jack Dangermond, Esri founder and president. "The Special Achievement in GIS Award recognizes exemplary organizations implementing spatial analytics technology to change the world. Highlighting the good work of users — in industries ranging from commerce to government — benefits the entire GIS community, and that's very valuable."

The City of Long Beach was one of 180 organizations in areas such as agriculture, defense, transportation, nonprofit work, telecommunications, and local and state government to receive a SAG Award. ESRI staff annually nominate hundreds of candidates from around the world for consideration, and Mr. Dangermond selects the finalists.

For more information on how the City of Long Beach is innovating through the application of GIS, visit http://datalb.longbeach.gov.

About Esri
Esri, the global market leader in geographic information system (GIS) software, offers the most powerful mapping and spatial analytics technology available. Since 1969, Esri has helped customers unlock the full potential of data to improve operational and business results. Today, Esri software is deployed in more than 350,000 organizations including the world's largest cities, most national governments, 75 percent of Fortune 500 companies, and more than 7,000 colleges and universities. Esri engineers the most advanced solutions for digital transformation, the Internet of Things (IoT), and location analytics to inform the most authoritative maps in the world. Visit us at ESRI.com.

About the City of Long Beach
Home to approximately 470,000 people, the multiple award-winning and innovative City of Long Beach offers all the world-class amenities of a large metropolitan city while maintaining a strong sense of individual and diverse neighborhoods nestled together along the California coast. Long Beach is home to the Queen Mary, Aquarium of the Pacific, several museums and theaters, a highly rated school district, Long Beach Airport, the Port of Long Beach, as well as many award-winning City departments such as Health, Parks, Recreation and Marine, Development Services and more. The City also has a highly respected university and city college, two historic ranchos, five hospitals, five golf courses, 170 parks, miles of beaches, marinas, bike paths, and a Bike Share program.