Long Beach Airport (LGB) held a full-scale emergency response exercise today, Friday, April 20, 2018. The drill tested the speed and effectiveness of emergency personnel and LGB staff in the event of an aircraft accident. Industry experts served as evaluators along with oversight from the Federal Aviation Administration (FAA). 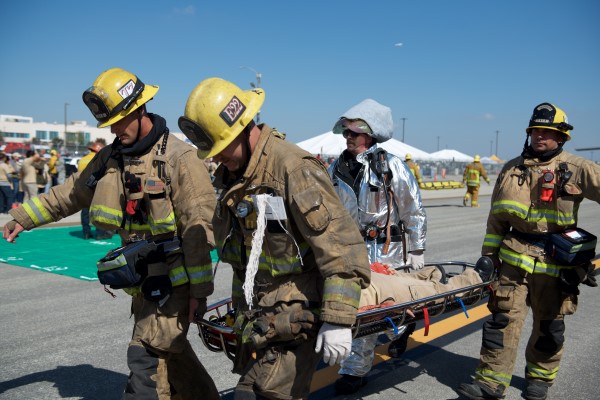 The emergency preparedness exercise, known as the Triennial, is required by the FAA. Commercial airports, such as LGB, must hold such an event every three years to maintain their Part 139 Airport Certification which allows commercial flights to operate out of the airport.

“This exercise enhances LGB’s working relationship with multiple local agencies and tests their readiness to deploy personnel and resources,” said Mayor Robert Garcia. “I would like to commend all agencies that took part in this drill. They helped provide an invaluable opportunity to practice coordinating medical and emergency performance.”

The exercise included more than 100 volunteer victims and a C-17 military aircraft. Organizers asked those involved to act as passengers that were part of the mass casualty incident. Responders and airport staff were then scored on their response efforts.

“This exercise is a valuable opportunity and while we hope such a crisis never occurs, it is imperative that we are always ready to take action,” said Long Beach Airport Director Jess Romo. “Safety and efficiency of our airport operations is of the utmost importance.”

The exercise did not cause any delays or interruptions to normal Long Beach Airport operations. In total, more than 400 participants acted out multiple roles that ranged from emergency responders to injured or deceased victims, and family members of the victims.