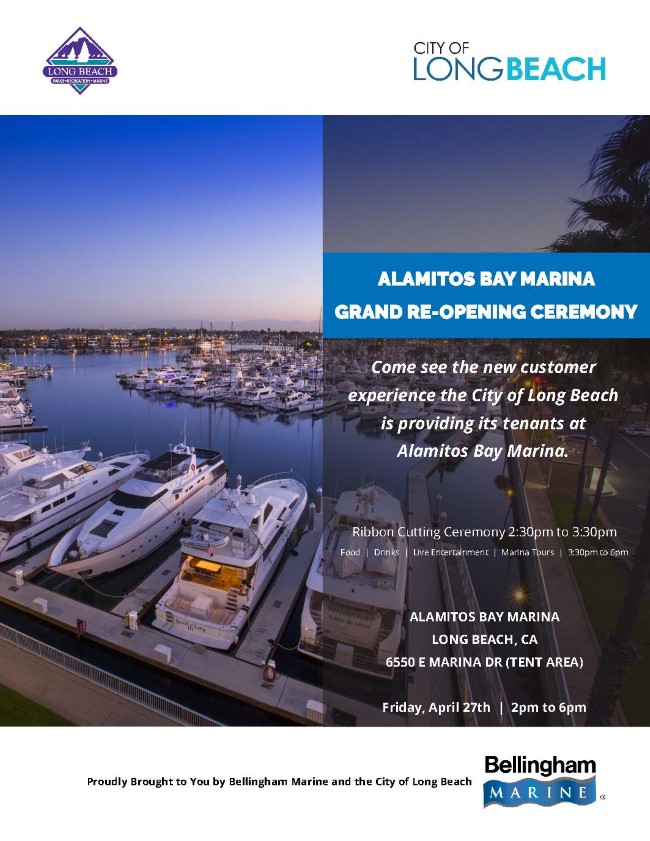 Long Beach Parks, Recreation and Marine and Bellingham Marine will mark the completion of a multi-year rebuild of the Alamitos Bay Marina on Friday, April 27, 2018, at 2:30 pm. The ribbon-cutting ceremony will be held in the Marina’s Basin Three parking lot at 6550 E. Marina Drive.

“The City of Long Beach is proud to be the operator of the largest municipally owned set of marinas in the United States,” said Mayor Robert Garcia. “This renovation project at Alamitos Bay Marina, represents the renewal of more than half of the City’s recreational marina inventory, and serves as a terrific example of our community’s ongoing commitment to provide the region with quality aquatics experiences.”

This $105 million dollar project included the complete upgrade of more than 1,600 boat slips throughout the marina and additional infrastructure improvements, such as:

“Alamitos Bay Marina is one of Long Beach’s true gems,” said Councilwoman Suzie Price. “This major investment in renovating the marina will ensure Long Beach will continue its leadership role in providing quality and affordable coastal access to the community.”

Alamitos Bay Marina originally opening in the late 1950s, and has served Southern California’s boating community as a popular home port and desination for guest boaters for more than 60 years. The marina includes boat slips and side tie docks ranging from 15 feet to 115 feet, to accomodate a wide array of recreational vessels.

This large scale project was funded entirely through revenue bonds, paid back through marina slip fees and other revenues. No General Fund tax dollars were used to fund the project or the Marina’s day to day operations.