Year-end citywide crime statistics show a continuing trend in the overall reduction of citywide crime, compared to last year and the City’s five-year average. Additionally, citywide violent crime is down 8% and property crime is down 4.3% from last year. Violent crime had reductions in robbery and a double-digit reduction in aggravated assaults. Property crime has reductions in six categories with the most significant reductions in bike thefts, residential and garage burglaries, and petty theft over the amount of $5.

“Crime continues to drop in Long Beach,” said Mayor Robert Garcia. “Over the last few years, we’ve continued to make investments in our Police Department, supported the use of new technology, and have made neighborhoods safer. I’m proud of the men and women of the LBPD, and their commitment to making Long Beach one of the safest big cities in America.” 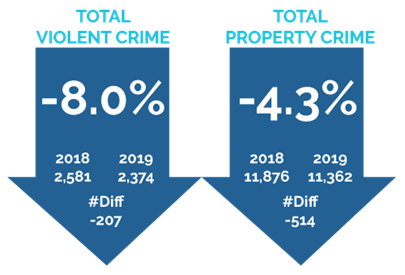 Overall, the City observed a reduction in total violent crime, however, increases in the category are attributed to rape and murder. There were 34 murders in 2019, which is an increase when compared to 30 from the previous year but continues to be a decrease when compared to overall historical crime statistics. Approximately, 44% of murders were gang-related and nearly 12% were domestic violence related. Rape remains one of the most unreported crimes and like most of the nation, the City has seen an increase in the category locally. A vast majority of reported incidents involved known suspects, and factors contributing to the upward national increase in rape are delayed reporting and drugs or alcohol.

“Overall crime totals continue to decrease and that is largely due to the work both sworn and civilian employees accomplish every single day. However, there is still more work to be done to further reduce crime in our City,” stated Chief of Police Robert G. Luna. “It is unacceptable that innocent people are impacted by senseless criminal activity. We will continue to work in partnership with our community on strategies to reduce crime and continue to support those victims affected by these crimes.”

Areas of continued focus for the Police Department in 2019 were:

The Long Beach Police Department is committed to continuing making Long Beach streets safe for all and firmly believes that collaboration with our community is a key factor in achieving that goal. Strengthening partnerships and communication, fostering community trust and engagement, and promoting the “See Something, Say Something” philosophy throughout our city will allow us to leverage our collective efforts to drive our crime rates even lower.

The mission of the Long Beach Police Department is to enhance public safety through partnerships while providing a safe City for all people. For more information on the Police Department, please visit us at www.longbeach.gov/police. Follow us on social media to stay connected: Facebook, Twitter, and Instagram.