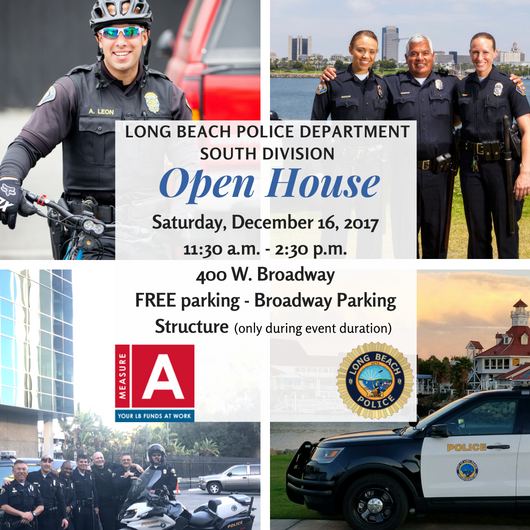 The City of Long Beach will celebrate the reestablishment of the Police Department’s South Patrol Division, 400 W. Broadway, with a free community Open House event on Saturday, December 16, 2017, from 11:30 am until 2:30 pm.

“Restoring the South Patrol Division will improve the safety of our community and demonstrates the City’s commitment to use Measure A funds to enhance public safety as promised,” said Mayor Robert Garcia.

The Open House will feature tours of the facility, meet and greet with officers, equipment displays, refreshments, and welcoming remarks at noon.

“We are very pleased to be able to restore the South Patrol Division Operations to the Public Safety Building,” said Police Chief Robert Luna. “We’re extremely grateful to our residents for supporting Measure A, which is allowing us to provide enhanced community oriented policing in the downtown area.”