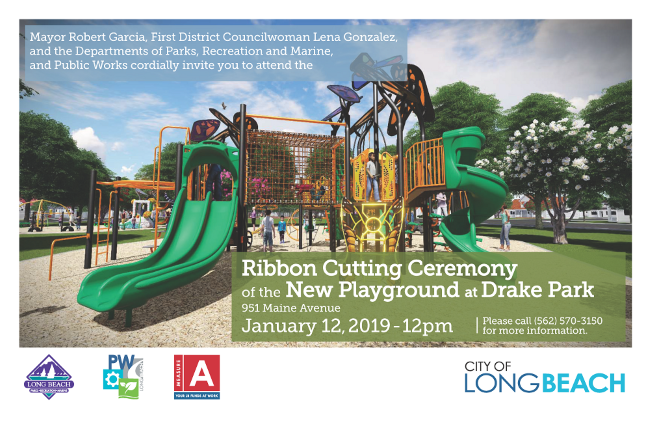 The public is invited to attend a grand opening celebration for the new playground at Drake Park, located at 951 Maine Avenue. The event will take place on Saturday, January 12, 2019, at noon. This is the fifth playground completed of six Measure A-funded playground upgrades. An adventure course guided passport will be provided to all youth in attendance to use to explore the new playground with some exciting superhero characters.

“Long Beach voters made this playground possible with their support of Measure A in 2016,” said Mayor Robert Garcia. “Measure A is funding repairs and upgrades to Long Beach parks and improvements in public safety that are improving the quality of life for all residents.”

The project included the installation of two new playground structures, one for ages two to five years and another for ages five to 12 years, site furnishings, and Americans with Disabilities Act (ADA) improvements. The playground was designed with a butterfly garden theme, intended to coordinate with native gardens and front yards contributing to the character of the surrounding Wilmore Historic District.

The project cost $942,900, which was made possible using $939,000 in Measure A funds and $3,900 in other sources. Measure A (2016) is a Long Beach ballot initiative approved by voters as a 10-year sales tax to fund public infrastructure and public safety services.