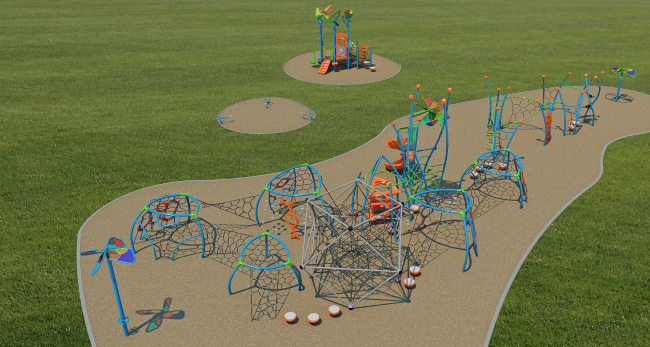 The public is invited to attend a grand opening celebration for the new playground at Whaley Park, located at 5620 Atherton Street. The event will take place on Wednesday, November 28, 2018, at 3:30 p.m.

This is the fourth playground completed of six Measure A-funded playground upgrades. An adventure course guided passport will be provided to all youth in attendance to use to explore the new playground with some exciting super hero characters. The Long Beach Symphony Instrument Petting Zoo will also be on hand to add to the fun. Children will have the opportunity to create sounds with various instruments.

“This playground is another example of the repairs and upgrades to Long Beach parks and improvements in public safety that are underway and made possible by Long Beach residents and their support of Measure A,” said Mayor Robert Garcia.

The project included the installation of two new playground structures, one for ages two to five years and another for ages five to 12 years, site furnishings and Americans with Disabilities Act (ADA) improvements. The playground was designed with an arts and sciences theme, intended to enhance the robust arts and sciences programming and camps available at Whaley Park community center.

“I am excited for our youth and families to experience this new playground,” said Councilman Daryl Supernaw. “They will really connect to its arts, science, and music theme that is prevalent in Whaley Park’s programming. The playground offers an opportunity to foster creativity through play.”

The project was made possible by using Measure A, and cost $910,000. Measure A (2016) is a Long Beach ballot initiative approved by voters as a 10-year sales tax to fund public infrastructure and public safety services.