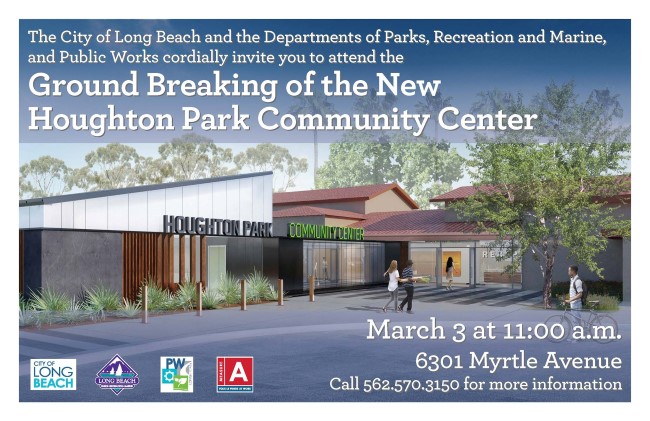 The public is invited to attend a Groundbreaking Ceremony for the new Houghton Park Community Center on Saturday, March 3, 2018, at 6301 Myrtle Avenue. The ceremony will begin at 11:00 a.m.

“The Houghton Park Community Center will set a new standard for design and complement our new Michelle Obama Library and Fire Station 12,” said Mayor Robert Garcia. “I am proud to mention that this project is made possible in part by Measure A, which voters passed in 2016 to fund public infrastructure and public safety services.”

This project includes the construction of a new 6,500 square foot community center building, with associated existing building renovations, utilities, hardscape and landscape site improvements. It will connect to the existing community center via a breezeway and will surround historical parts of the 1930’s portion of the building. The new building will be constructed to the east of the existing community center, and will feature two large multipurpose rooms that can be divided further into two rooms by a retractable wall. The multipurpose rooms contain equipment, material storage and amenities to support a variety of programs and activities. The project will also result in a more accessible, reconfigured parking lot. The building is designed to earn a Leadership in Energy and Environmental Design (LEED) Silver rating and will use drought tolerant landscaping around the building and courtyard to cut down on water usage.

“At long last, North Long Beach is getting the community center it deserves. I am thrilled that this new building will serve the needs of over 90,000 North Long Beach residents with space for after school, teen and senior programs,” said Vice Mayor Rex Richardson. “Our community is excited about this new addition and looks forward to the unveiling of the Community Center next year!”