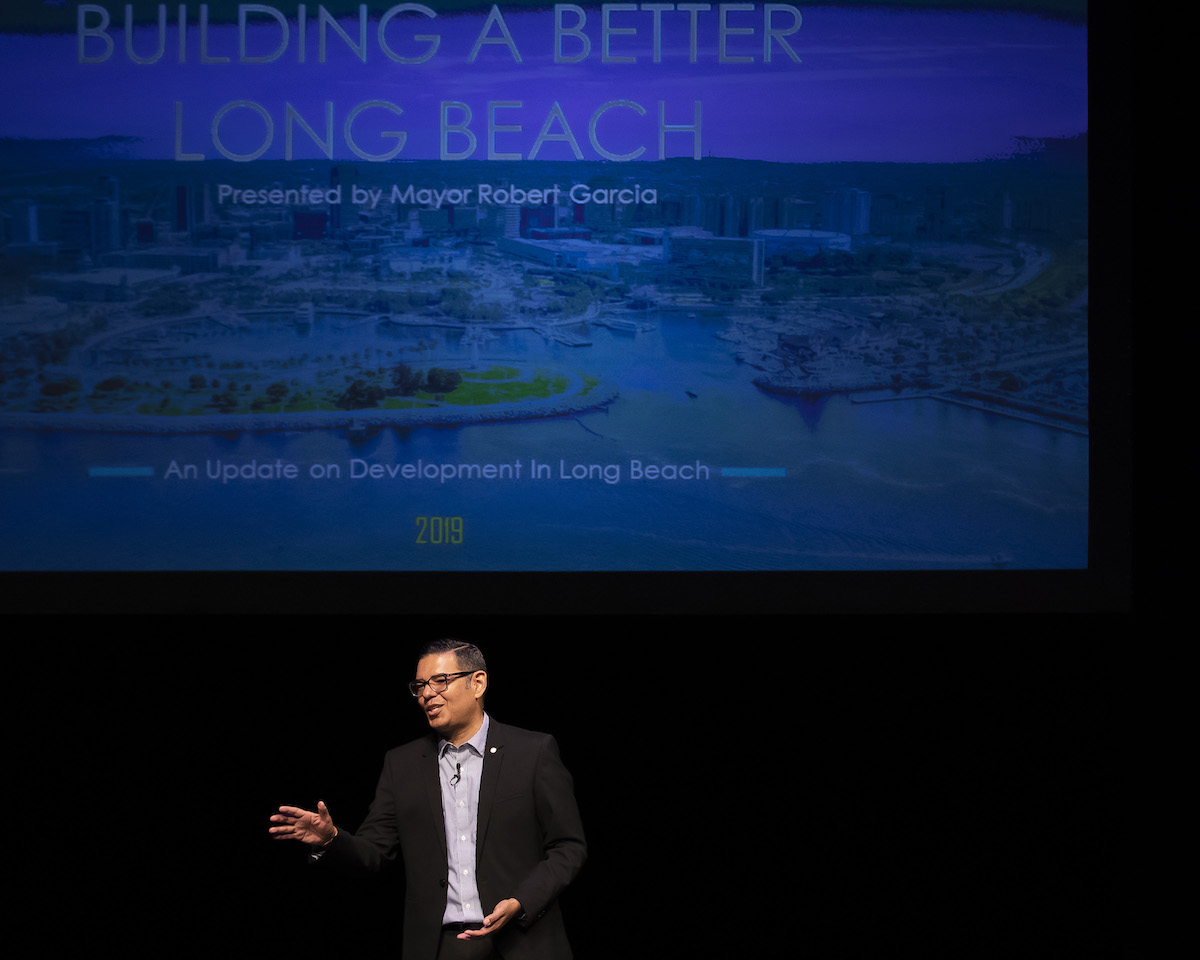 More than a dozen high-profile projects that have been recently completed around the City were showcased, including the revitalized Long Beach Civic Center, with the new City Hall, Port of Long Beach Administration Building and Billie Jean King Main Library. Among the other finished works presented were: The Linden and Oceanaire mixed-used projects; the Long Beach Exchange retail center; the Riverdale housing development; and Trademark Brewing, a craft beer company located in a restored auto repair shop.

The Mayor noted that altogether there has been $3.5 billion in construction activity in process or underway around the City during this fiscal year, including the new Gerald Desmond Bridge, the Middle Harbor Terminal redevelopment, Shoreline Gateway mixed-use project and the Technology Park build-out for Prologis. The Breakers and Ocean Center, historic landmark buildings located Downtown, are undergoing complete renovation.

More than 40 projects were detailed that have been approved or are proposed and under review. These include the Belmont Aquatics Center, a 30-story hotel at 100 E. Ocean Blvd., the West Gateway and the downtown classroom center for California State University, Long Beach.

In addition, the Mayor described the City’s initiative to attract or expand technology-oriented businesses, which now includes completed projects for Spin Launch, a new-to-the-market mini-satellite launching operation and Virgin Orbit, which builds dispatching stations for rocket launches. Other projects in the works include: Zwift, a virtual cycling software company; new corporate offices for Laserfiche, a digital software company; and the re-purposing of the former Boeing C-17 manufacturing plant, by property development firm The Goodman Group.

The Mayor noted that the City’s local economic outlook is bright. This fiscal year, the City issued 2,255 new business licenses and the average unemployment rate is just 4.58%, down more than half a percentage point from the previous fiscal year. Housing shortages are being addressed, and approximately 4,000 residential units are in the pipeline.

The Building a Better Long Beach presentation will be available to view online at: www.longbeach.gov. For additional information on the City’s development efforts, visit www.longbeach.gov/lbds.

Serving residents, businesses, and the community at large, the City’s award-winning Department of Development Services sets a standard for high-quality, innovative urban planning and livability efforts that create more progressive and sustainable communities within Long Beach. Through a variety of development, code enforcement, housing and neighborhood services, and building activities, the Department builds a better future for the diverse City while also honoring its unique past. For more information, visit www.longbeach.gov/lbds/. Like our Facebook page and follow us on Twitter.